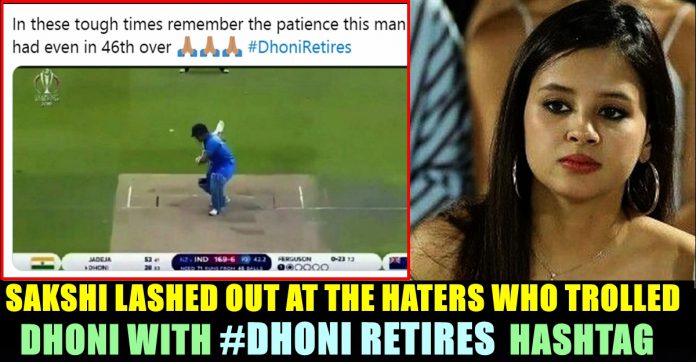 In a way of responding to the notorious hashtag #DhoniRetires, Sakshi dhoni, wife of the former Indian captain came up with a response to the vicious twitter users. The hashtag consisted enormous number of tweets, in which many of them spewed hatred at the world cup winning captain. Majority number of tweets pointed out the bad performances of the cricketer in his 16 year long cricketing career. However, fans of the cricketer came up with a hashtag to counter attack the negative hashtag. #DhoniNeverTires the hashtag said, under which fans praised him for his achievements. (Also Read : Hashtag #DhoniRetires Started Trending !! Twitter Explodes)

In a way of clearing the air, Sakshi posted a tweet slamming people who were the reason behind the negative hashtag. She said that people have gone mad due to the lockdown stress and asked them to get a life. “Its only rumours !! I understand lockdown has made people mentally unstable. #DhoniRetires.. Get a life” read her tweet.

However, she deleted the tweet minutes after it went viral across social media platforms. This is not the first time Sakshi raising her voice against the baseless rumours regarding her husband’s retirement. In September last year, many fans started speculating that Dhoni is going to announce retirement after seeing one of a post uploaded by Kohli. In the post, Kohli praised his senior for his motivation in a game that made India win. The timing of the tweet made fans to speculate that Dhoni is retiring.

At that time, Sakshi posted a tweet writing “Its called rumours !” to clear the air.

Few days ago, when reports suggested that Dhoni has provided only one lakh for Coronavirus fund relief, Sakshi posted a tweet saying “I request all media houses to stop carrying out false news at sensitive times like these ! Shame on You ! I wonder where responsible journalism has disappeared !”

I request all media houses to stop carrying out false news at sensitive times like these ! Shame on You ! I wonder where responsible journalism has disappeared !

The highlight of the movie is the cat and mouse game being played out by Nayanthara and Kashyap, with lot of punchline dialogues that...

“If You Go To Smoking Room Again, You Will Be Evicted” – Bigg Boss Warned

Bigg Boss warned ADK, one of the contestants of the ongoing Bigg Boss show after he went to smoking zone despite the warning of...