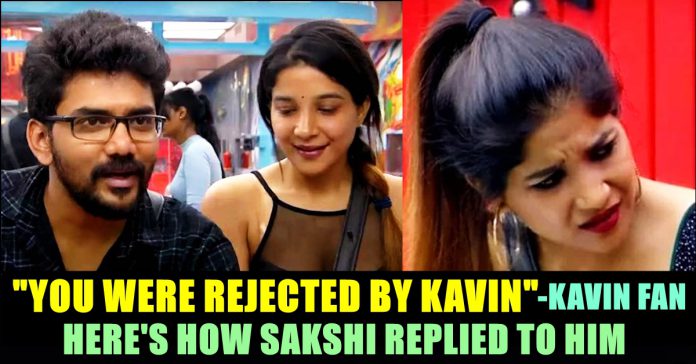 Sakshi still couldn’t come out of the trauma that Bigg Boss show made on her. She has been watching the show since her eviction and even made her re-entry into the house only to make sure to the audience that she doesn’t attached to Kavin anymore with whom she had a strong relationship while being inside the house.

Towards the end of yesterday’s episode, Kavin played with Sherin like never before. Sakshi who saw this in Tv seemed to be frustrated and she expressed it in her official twitter account. In her tweet sakshi wrote “Seriously ?? this was all that was left ?? hatsoff !!” she wrote after the episode streamed. However, the actress deleted the tweet later for some unknown reason. Check out the screenshot of her tweet here :

Since yesterday she has been replying to those who criticize her for her tweets. To one of a follower who said Kavin rejected her, Sakshi said that she was not rejected by him but feels saved. “I dont feel rejected rather i feel saved! For him- no comments😂” she said in her reply.

Check out her reply :

I dont feel rejected rather i feel saved! For him- no comments😂

Check out some of her other replies :

Thnk u dude for ur info on ur maturity level! Honestly not needed🙄🙄wat surprises me is unrelated ppl interfering in my life🙈 trying to get attention ! Lets talk bt maturity😂

Hahahahaha! Its like i forced u guys to follow me and comment in all my tweets!! Yappa saami!! Intha thola thangamudile😂😂 u guys have so much more to do…wat r ur really doing here🙄

Dude!! Mind ur language!! No room for indecent behaviour here.. sorry ur going to be thrown out of my twitter if this continues😂😂😂

Despite of the humongous hatred he receives, Kavin managed to stay inside the house by beating Vanitha on Sunday. Surprising fact is that he got saved as the first contestant among all. It is highly believed by the viewers of Bigg Boss that the contestant who gets saved first is the one who got highest number of votes from the audience. According to that theory, Kavin is the highest number of vote getter in last week.

Sakshi Agarwal who got evicted after 50+ days, is very much active on Social media platforms since her eviction. Her existence inside the house made much impact as she maintained a strong bond with the other contestants. During her stint inside the house, Sakshi was seen attached to with Kavin, the Saravanan Meenatchi star and Sherin.

What do you think on these replies of Sakshi ?? Comment your views below !!