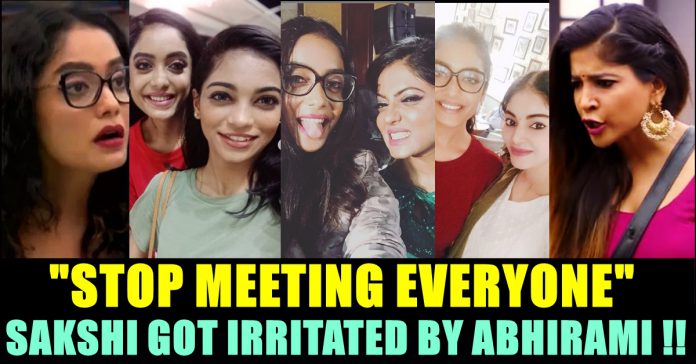 Now both of them got evicted from the house due to lack of votes from the audience. Since eviction, Abhirami has been meeting the other evicted contestants and their families and posting pictures of it in her Instagram account.

Finally met my reshuuuuuu…. walked the show as showstoppers …. 🦋

Already missing you both ♥️🦋 can't wait for finale 🔱

Sakshi Agarwal who is known for her appearance in Kaala movie has indirectly asked Abhirami to stop meeting the other contestants. She stated that Abhirami is meeting them only to spread negativity about the rest of the contestants. She also asked her not to forget people who stoop up for her.

Her tweet read as “High time people move on!! Biggboss housemates need to stop meeting others just to spread negativity about the rest! There is so much more you can do when you meet🙄🙄 dont forget people who stood up for you🤷‍♀️😆#GetALife”

Check out some of the reactions for this tweet of sakshi :

Abhi is diplomatic. She is trying to get support from boys gang against madhu bec she already said she will reply to madhu after they come out. So she is supporting them even if they continuously nominating or Backbiting her

Seriously abhirami is doing so much drama..she is a psycho…she shouldn't forget the fact that the boys gang was reason for the damage

It is notable that they both met and had few moments together after their evictions.