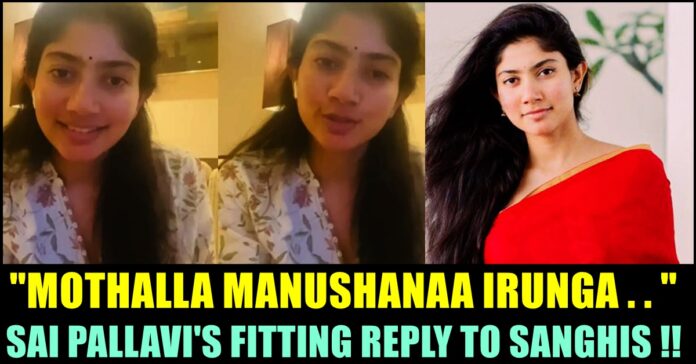 “This is the first time I might be thinking twice before talking my heart out. In a recent interview, I was asked if I’m a supporter of left or right wing and I clearly stated that I believe in neutralism. We need to human beings first before we identify ourselves with our beliefs. Oppressed should be protected at any cost” Sai Pallavi said in the video she released.

“Being a person who I am, I will never belittle the tragedy like genocide and the generations of people who got affected by it. Having said that, I can never come in terms with mob lynching that took place during the Covid times. I saw the video and was in a state of shock for days. I believe that violence in any form is wrong and violence in the name of religion is huge sin” Sai Pallavi said and added that it was all she intended to say.

The actress, further said, that she got disturbed on seeing people online justifying the act of mob lynching. I don’t think any of us have the right to take another person’s life and also said that she firmly believes about all the lives are equal as a medical graduate.

Further, Sai Pallavi said that she remember about how she pledged “all the Indians are her brothers and sisters and I love my country” during the 14 years of her schooling and said that it got registered so deep in her heart. Sai Pallavi also expressed her sadness over how prominent celebrities and websites carried a snippet of her interview and confronted her without even seeing her full interview and understanding the genuinity behind it.

The “Premam” actress also thanked the people who stood by her during the past couple of days and thanked them for not letting her feel alone as she was conflicting herself wondering what she did wrong. Adding the video, Sai Pallavi said that she wish all peace and happiness.

South Indian Actress Sai Pallavi’s statement over the killings that are taking place due to religion has triggered a set of online users who identify themselves as the supporters of right wing. The actress, while saying that she is belongs to a neutral family, compared that Kashmir genocide and lynching for “cow smuggling”. As soon as the actress made such statement, hashtag “Sai Pallavi” is trending in the micro blogging social media site with 11k plus tweets.

Known for speaking her heart out in public events and interviews, Sai Pallavi is awaiting for the release of her upcoming film “Virata Paavam”. During one of the promotional interviews for the film, the actress left the social media divided after making a statement on “Cow smuggling” and “Kashmir Genocide”. While set of people expressing their views supporting her, others stating that they both are not same and spewing hatred at the actress.

“I grew up in a neutral environment. I have heard about the left wing and right wing. But, I cannot say who is right and who is wrong. The film, The Kashmir Files, shows how Kashmiri Pandits were killed. Recently, there was an incident of a person being killed for carrying a cow because he was suspected to be a Muslim. After killing the person, the attackers raised “Jai Shri Ram” slogan. What is the difference between what happened in Kashmir and what happened recently ??” Sai Pallavi asked.

The actress, further added that her family taught her to be a good person. “You need to protect the oppressed. Their stature isn’t important. If you are a good human being, you don’t feel that one is right” Sai Pallavi said.

This Vijay TV Star Got Brutally Trolled For Consoling Sandy !! Check Out Why !!

The third season of Bigg Boss 3 is the most happening reality show among Tamil TV audience. The show involves 16 contestants with both...