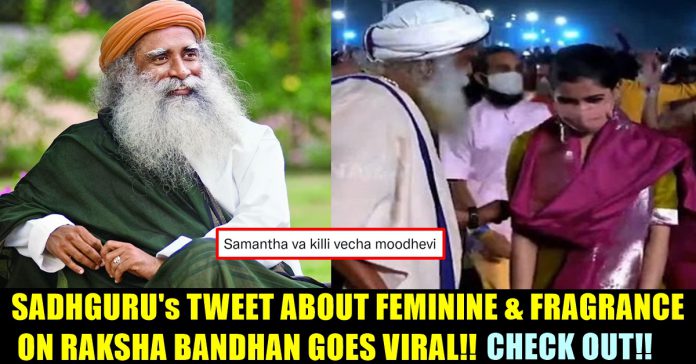 Raksha Bandhan is celebrated to cherish and value the relationship between brothers and sisters. This day praises the protection, responsibility, love, and care siblings/ cousins carry for each other. Over the decades, Raksha Bandhan is spread all over the country and girls have started to tie rakhi to all their friends whom they consider as brothers. Raksha Bandhan was celebrated on August 22, 2021. Various people shared their wishes on social media. Many of them have shared the love they have for their brothers or sisters through posts and tweets. Messages of gratitude, love, missing were occupying social media. Pictures of various celebrities tying rakhi to their brothers or giving gifts to their sisters were posted.

Amongst the wishes posted by many people, a post of Sadhguru has put people into a state of tumult. Jaggi Vasudev aka Sadhguru is an Indian Yoga Guru and an author. He is known across the world for his Isha Foundation in Coimbatore and his Mahashivratri function.

He has never failed to make intrigued people through his tweets. His tweets are unfathomable and are far from the reach of any human mind. Sadhguru has posted yet another mysterious Raksha Bandhan wish. The tweet was undoubtedly enigmatic. In the tweet he has conveyed an obscure message regarding feminine & fragrance.

#RakshaBandhan is a promise to protect the Feminine – not because of Fragility but for the value of Fragrance. –Sg

People have made attempts to decode the message of Jaggi. Most of them have mocked Sadhguru on his tweet. Some of them have shared their understanding of the tweet, some have made fun of him and have sarcastic comments on him. Lots of hilarious interpretations were made by the netizens. We also come across tweets saying that he doesn’t make any sense. Few people have condemned him for his hypocrisy.

" Silky Beauty slips so fast, women try their best to guard, but it is like a sweet fragrance, the little bit remains and the rest goes by…"

This idiotic poem I wrote when I was 12-13 years old. even at that age, I was much better than sad-guru.😉🤣🤣

Can someone explain this perverse dimension to me?

The drunken series of the sadguru!!🤮🤮🤮🤮🤮

This is whole new nonsensensical dimension.

Gimme the shit you're on, cuz! pic.twitter.com/BGfJJp5P0g

Previous articleBenny Dayal Replied To A Follower Who Spewed Hatred At Him On His “Onam” Post !!
Next articleJUST IN : BJP’s Senior Leader K.T Ragahvan Accused Of Sexually Exploiting Women !!

Leading Indian Spinner Ravichandran Ashwin, in his interview with sports journalist Sidharth Monga, opened about how it felt for him when former Indian coach...