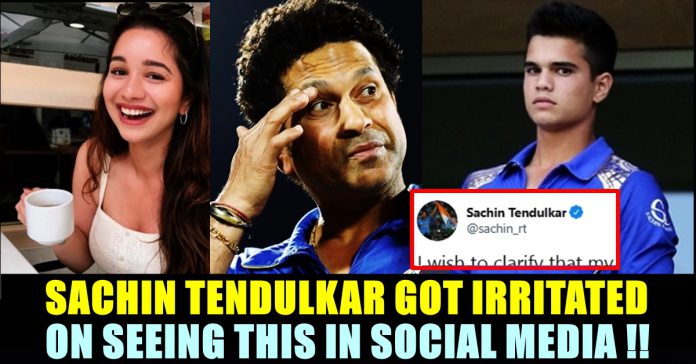 Followed by many celebrities who got affected from this fake accounts issue, Sachin Tendulkar, the most popular cricketer in the world also happened to face such issue. The cricketer took his official twitter account to clarify on the matter regarding the Fake twitter accounts of his children Sarah and Arjun Tendulkar.

In his official twitter account, which enjoys more than 3 crore followers, Sachin wrote “I wish to clarify that my son Arjun & daughter Sara are not on Twitter. The account @jr_tendulkar is wrongfully impersonating Arjun and posting malicious tweets against personalities & institutions. Requesting @TwitterIndia to act on this as soon as possible.”

I wish to clarify that my son Arjun & daughter Sara are not on Twitter.
The account @jr_tendulkar is wrongfully impersonating Arjun and posting malicious tweets against personalities & institutions. Requesting @TwitterIndia to act on this as soon as possible.

The account Sachin Tendulkar mentioning, earlier posted a tweet on the neglection of Sanju Samson from the national team. It blamed the selection committee and its leader MSK Prasad for selecting Rishab Pant and giving him multiple chances.

As soon as Sachin Tendulkar posted the tweet, the appropriate action has been taken against the fake account and it was suspended considering the violation of Twitter rules.

Arjun Tendulkar bowls left-arm medium pace and has represented Mumbai at the U-16 and U-19 level. The son of the legendary Indian batsman was selected for the Mumbai senior team for a pre-season tournament earlier this year.

Arjun also played for India U-19 in June 2018 for 2 4-day matches in Sri Lanka. Before being picked for the tour, the cricketer was part of a group of U-19 cricketers who underwent a month-long camp in Dharamsala.

Team India coach Ravi Shastri on Thursday dismissed all speculations about whether Mahendra Singh Dhoni was retiring or not. Shastri's comments came after social media...