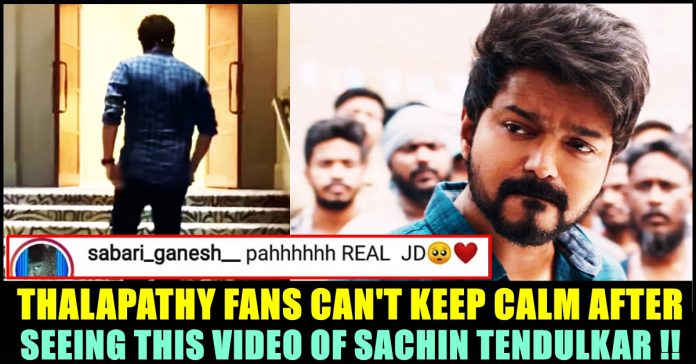 As the 14th edition of Indian Premier League is going to resume in less than a week, social media handles of teams became active and has been updating about the activities of their players, coaches and mentors. A reel video uploaded by Sachin Tendulkar, mentor of the defending champions Mumbai Indians, in his official twitter account being loved, not only by cricket fans but also by the fans of Tamil actor Vijay who is fondly called as “Thalapathy” by his fans. Reason behind the excitement is the audio used for the video of the “Little Master”.

In the latest film “Master”, a ringtone used by character JD played by Vijay became viral among the youngsters. Many kept the tune composed by Anirudh Ravichander as their ringtones and caller tunes as it became a trending sound in every nook and corner of the country. Now, Sachin tendulkar shared a reel video in his official Instagram account which showed himself making his presence at UAE for the remaining matches of the tournament.

Along with the fans of Sachin and Mumbai, fans of actor Vijay got excited as the video contained music from the film of their idol. What’s more special is, the blue colour checked shirt Tendulkar wearing was, similar to the one actor Vijay donned for the opening song of “Master” which goes like “Vaathi coming”. “First i feel like vijay is walking through step 😍😍😍” a fan wrote as his comment whereas another one said that the “Real JD” has arrived.

The remaining matches of IPL 2021 is all set to resume from 19th of September month. Chennai Super Kings and Mumbai Indians are going to face each other in the first match which is scheduled for 7 : 20 in the evening. As far as the points table is concerned, Delhi Capitals, Chennai Super Kings, Royal Challengers Bangalore and Mumbai Indians are the four teams that are topping table with 12, 10, 10, 8 points respectively. With half of the tournament is going to be completed in the next 1 month, fans are pretty much excited to witness the drama.

Comment your views on Sachin Tendulkar making his entry with JD ringtone and Thalapathy fans gloing gaga over it !!

Previous articleActor Siddharth Lashed Out At A BJP Supporter For Tagging Him In Twitter!!
Next articleYoung Heroine’s Sexual Allegation Against Arjun : Notice Sent To Director & Producer

Yogi B Replied To Somashekar Who Didn’t Give Credits For Singing His Song !!

In the fourth season of Tamil BIGG BOSS show, contestants were asked to tell audience and to their co-contestants about the hardest path they...