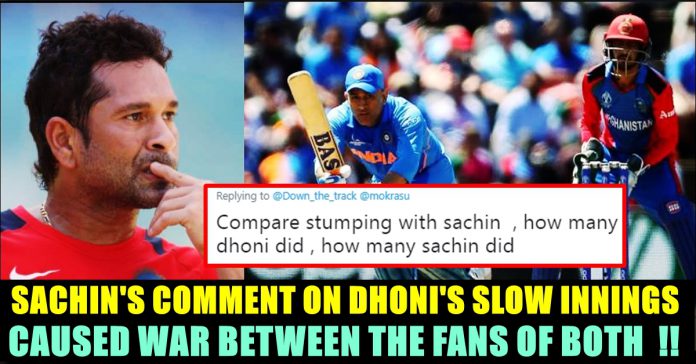 Mahendra Singh Dhoni’s strike rate was once again under the scanner on Saturday as India laboured to 224 for 8 against Afghanistan in their World Cup 2019 match in Southampton.

Dhoni scored 28 off 52 balls in the middle overs, at a time when the Indian team needed him to up the ante and take the attack to the opposition but the former skipper just couldn’t get going against the disciplined Afghanistan spinners. “I felt slightly disappointed, it could have been much better. I was also not happy with the partnership between Kedar and Dhoni, it was very slow. We batted 34 overs of spin bowling and scored 119 runs. This was one area where we didn’t look comfortable at all. There was no positive intent,” Tendulkar was quoted as saying by India Today.

This comment from the master created huge controversy among the fans of Dhoni who started trolling Sachin and it made fans of the legend to troll back them. This even caused fans comparing the biopics of both the cricketers.

Strike Rate ( Overall Career ) of the INDIAN batsmans who have played the 2007 WorldCup.

Sachin (about Dhoni): He did not show any positive intent against Afghanistan

Dhoni: Are you talking about the positive intent which you used to show in your 90s..

Laughing off seeing the maturity of these fan boys fighting over Sachin’s comment on MS and how it’s turned to a fan war. 😀

It’s an Opinion of a Legend. Take it. Move on. Just #WhistleforIndia in the next game than crying over it. #TeamIndia #Dhoni #Sachin

Dhoni is a Word
Sachin is an Emotion

To be honest Sachin’s statement about #Dhoni‘s innings is fairly true. He has really struggled against spin bowling and is not even able to rotate strike. He’s still an integral part of the team but he has to work on his batting approach.

Compare stumping with sachin , how many dhoni did , how many sachin did

Despite his poor run with the bat, Dhoni’s ability to read the game and guide the bowlers accordingly makes him the go-to man of the Indian cricket team. 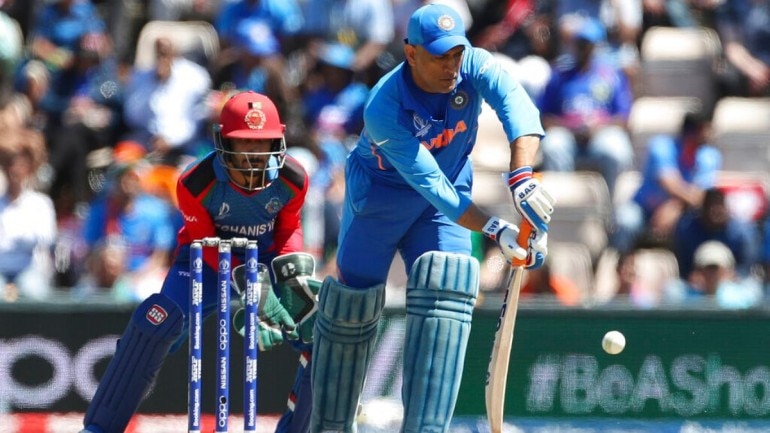 Dhoni, featuring in his fourth World Cup, has amassed over 10,500 ODI runs at an average of 50.18. He also holds the highest score of an unbeaten 183 and records 10 centuries and 71 half-centuries to his name.

Previous articleAbhirami Admitted That She Is In Love With Kevin On The First Day Itself !! Check How Internet Is Reacting !!
Next articleYouths Called The Number Displayed In “AADAI” Teaser & Got Extremely Trolled By Sarithiran !!