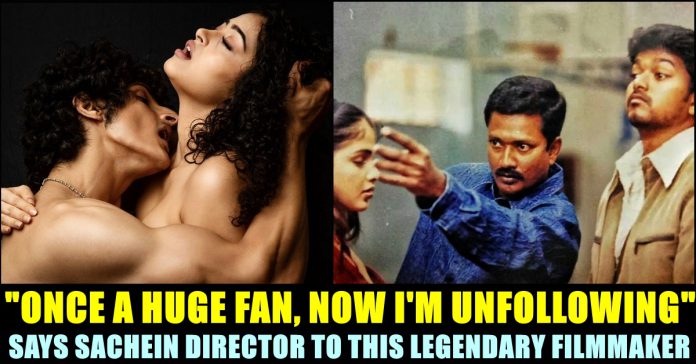 Director Ram Gopal Varma, one of the most influential filmmakers of his prime time, is currently busy promoting his upcoming movies through his official Twitter account. He who recently released a movie named as “Climax”, having adult film actress Mia Malkova in the lead, also made a short film named as short film “Naked”. Both the films stirred controversy due to its adult content among the fans. However, the filmmaker now rolled up his sleeves for his next venture started promoting it by releasing the posters of it.

Thanks to @apsara_rani_ I realised about Odisha and now I discovered another talent from Odisha called Rock and I cast him opposite Apsara Rani in THRILLER @Rock_Kacchi pic.twitter.com/Swmhq3UzHw

After CLIMAX and NAKED we are on the way with THRILLER @SouthplusENT@ShreyasET pic.twitter.com/pqPRbVp59w

Ram Gopal varma is known for cult classic movies such as Satya which was listed in CNN-IBN’s 100 greatest Indian films of all time, Sarkar etc. He is also known for presenting the Indian Political Trilogy, and the Indian Gangster Trilogy. Film critic Rajeev Masand had labelled the series as one of the “most influential movies” of Hindi cinema.

Nowadays, the filmmaker is very much involved in posting controversial tweets in twitter where he was followed by more than 44 lakh people. Now, on seeing these posters from him, director of Vijay’s romcom movie Sachien and son of legendary late filmmaker Mahendran, John mahendran expressed his disappointment.

Once a huge mad fan….But sadly time to unfollow you Ramu…

John is yet to receive a reply from Ram Gopal Varma but has been receiving replies from his fellow twitter users. Comment your views on these posters of Ram Gopal Varma and the decision made by John !!

Horrific Video Of The Pollachi “Pannai Veedu” Which Ruined Many Young Girls Lives !! Check What Thirunavukarasu Mother Has To Say !!

One of the cons of being famous includes being subjected to unnecessary harassment. One of the recent targets of such an issue is Calendar...