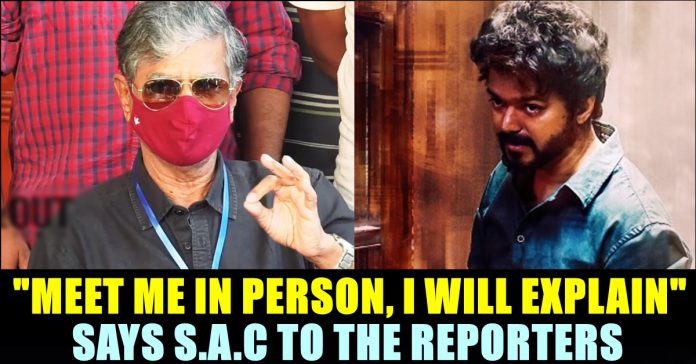 SAC Left The Press Meet Without Answering The Reporters !! WATCH

S.A Chandrasekhar, father of actor Vijay appeared in front of press reporters to state his opinions regarding the new political party he initiated and denied to answer their questions, citing lack of time. The veteran filmmaker asked reporters to meet him personally and left the press meet in midway saying that he never gave interview to multiple reporters at once.

Veteran filmmaker and actor SA Chandrasekhar registered a political party with the Election commission of India on Thursday. Moments after the filmmaker confirmed that he has started a political party in the name of “All India Thalapathy Vijay Makkal Iyakkam”, his son actor Vijay issued a statement distancing himself from the party.

Vijay, in statement, made it clear that he has no connection with the political party started by his father and requested his fans not to support the party in any manner. “I came to know that my father has started a political party through media portals. I hereby inform that there is no relation between myself and the party, directly or indirectly.” Vijay said in his statement.

“Through this statement, I am making it clear that I won’t be controlled by that party in the future. Further, I request my fans not to join themselves with that party or to work for it. That party has nothing to do with our club” Vijay firmly said.

The “Bigil” actor also warned that strict action will be taken against those who are using his name or his photograph or his All India Thalapathy Makkal Iyakkam for any kind of mischief.

Check out the actor’s press release below :

Now, in the press meet, SAC said that he started the political party for himself. “I feel nervous on seeing these many reporters interviewing me without my invite. Without my PRO’s invite, you people have came here. Time is 2 : 30, my lunch time. But if I fail to answer now, you would accuse me of lacking respect. Let us have this meeting for 5 minutes for the sake of your arrival” SAC said after seeing the reporters.

When a reporter questioned what is the necessity of changing Vijay Makkal Iyakkam into a political party now, SAC said that he wanted to change it for himself. When another reported asked about the press release of the actor, SAC said that he will explain everything in a private interview.

“You said that you have started the party for your ownself. Don’t you initiated it for the welfare of people ? what is your goal ?” asked a reporter to which SAC answered by asking the reporter to meet him in person. Watch the video below :

“I don’t have time to answer these kind of questions now. I started the party do good things. I have never gave an interview in front of these many mics. Please come one by one. I will answer” said SAC and left. This press meet caused various kind of reactions in Internet from the fans of the actor and from the public. Comment your views !!

Hansika Started Concentrating In Business Due To Lack Of Film Offers ?? Check Her Reply

After Hansika Motwani launched her "The Balloon Stylists", a new venture which focuses on parties and other celebrations, a news in Dinamalar website surfaced...

Gautham Menon Finally Apologises to Karthik Naren, He Has A Reason For The Apology, Check out!

The heated up tweet exchange between the young filmmaker Karthick Naren and his ongoing "Naragasooran" film's producer and a reputed director of Tamil Cinema...