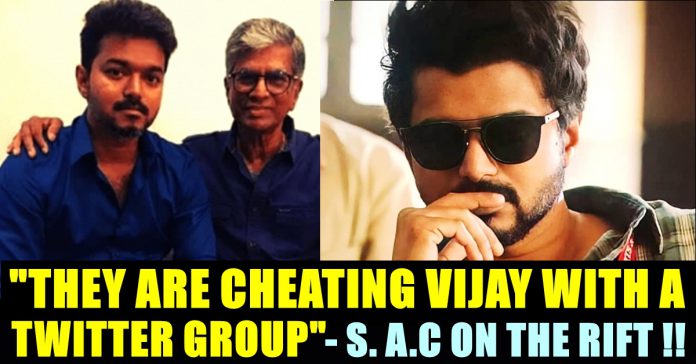 After all the furores that took place between S.A Chandrasekhar and his son Vijay regarding the political party the former attempted to initiate, the filmmaker took part in an interaction with Cinema Vikatan and sent a message to his son by requesting his son to speak with him. He revealed that Vijay stopped talking with him since November 5. He also talked about the failure of his previous film “Capmaari” and opened how it caused sleepless nights for him.

On November 5, Veteran filmmaker and actor SA Chandrasekhar registered a political party with the Election commission of India. Moments after the filmmaker confirmed that he has started a political party in the name of “All India Thalapathy Vijay Makkal Iyakkam”, his son actor Vijay issued a statement distancing himself from the party.

Vijay, in his statement, made it clear that he has no connection with the political party started by his father and requested his fans not to support the party in any way. “I came to know that my father has started a political party through media portals. I hereby inform that there is no relation between myself and the party, directly or indirectly.” Vijay said in his statement.

“Through this statement, I am making it clear that I won’t be controlled by that party in the future. Further, I request my fans not to join themselves with that party or to work for it. That party has nothing to do with our club” Vijay firmly said. The “Bigil” actor also warned that strict action will be taken against those who are using his name or his photograph or his All India Thalapathy Makkal Iyakkam for any mischief.

Now, in a video interview with Vikatan youtube channel, S.A Chandrasekar said that the problem lies on himself seeing Vijay as a child. “I used to beat him during his childhood to make him do home works. It is my fault to see him in the same way when he became a 35 year old man” the filmmaker said.

Further S.A Chandrasekhar said that he gave an important position to a former politician named “Bussy Anand” in “Vijay’s Makkal Iyakkam” and regretted for making that decision. The filmmaker said that people like Bussy Anand caused the rift between himself and Vijay.

S.A Chandrasekhar also explained how they made use of the technology and earned the belief of Vijay. “In a twitter group which has 1000 plus members, he would spread a picture of himself sleeping on the floor. Vijay who is also active in the group, would see the picture and ask him to sleep in his room” the filmmaker said.

The filmmaker also said that he acted as a manager for Vijay till Thuppakki without concentrating on his own career. “I even apologized to him on the same day when the issue occurred. I myself don’t like him entering the politics now. I want him to stage a platform for himself in politics from now on in order to excel in the future” he said.

The filmmaker also sent a personal message to actor Vijay through the video interview. “Vijay, no father would like ruining his son’s life. Particularly, your father won’t do it. Because I lived, living and will live only for you. Forget the mistake I committed and you will understand me. I want you to come out from the cage and it will be harder if you get trapped into it. I am saying it as a father, understand me. Everything I do is being wrongly portrayed to you.” S.A.C concluded by writing a letter.