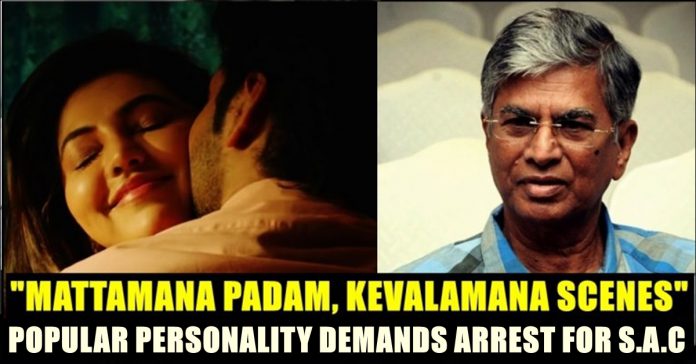 S.A Chandrasekar is one of the very few experienced filmmaker in Tamil film industry who are currently working. In his 40 year long career, Chandrasekar made many impactful movies and mainly introduced his son Vijay who is one of the leading actors of South India now.

The director who made 70 movies throughout his career, introduced Vijay in Naalaya Theerpu. Some of his notable movies are Sattam Oru Iruttarai, Naan Sivappu Manithan, Nenjirukkum Varai etc. He recently made a movie titled as “Capmari” by having actor Jai in the lead. The film marked the filmmaker’s 70th movie and had Athulyaa, Vaibhavi in supporting roles.

The film which was given “A” certificate by censor board hit the screens recently and is running well. The trailer of the film suggested the audience that the film is going to be a romantic comedy about a man who got married to two women.

Now Mr. Sreedhar, an important member of Tamilnadu theatre owners association has released a statement bashing the “Capmari” movie for its content. “The movie stans true to its title. I don’t know how he believed that this movie will do well in theatres. He is talking about politics and expressing his opinions regarding various issues. He is even saying that he is going to make change in this country. The film’s script, dialogues and visuals are very low in standards.” said Sreethar to the press and media. (Also Read : Fan Criticized Athulya For Acting In “Capmari” Movie !! Here’s How She Replied To Him !!)

Further he added that S.A Chandrasekar should get arrested in POCSO act, considering the current situation of the state. Check out his interview here :

Apart from Sreedhar, many people from online also thrashed the movie for its obscene content. What irked them the most is, an experienced filmmaker like S.A Chandrasekar getting involved in such scripts. Check out some of their reactions here :

Comment your views on these reviews Capmari is getting !!