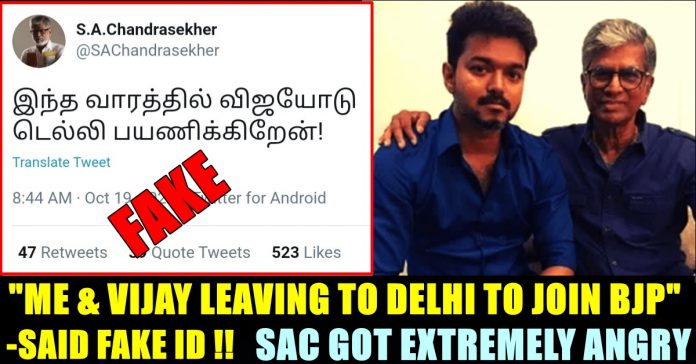 Director S.A Chandrasekhar got extremely angry and expressed his disappointment in front of media for the baseless rumours surfaced against him regarding his political stint. A fake account was created in twitter in the name of the legendary filmmaker and started spreading false news about it. For past few weeks, media portals has been speculating that the filmmaker is joining the BJP party for the upcoming elections. Now, in a way of denying it, Chandrasekhar gave an interview to media saying that such reports are not at all true and added that they are doing these kind of cheap things to earn money.

In his 40 year long career, Chandrasekar made many impactful movies and mainly introduced his son Vijay who is one of the leading actors of South India today. The director who made 70 movies throughout his career, introduced hisd son Vijay in Naalaya Theerpu. Some of his notable movies are Sattam Oru Iruttarai, Naan Sivapu Manithan, Nenjirukkum Varai etc. He recently made a movie titled as “Capmari” by having actor Jai in the lead. The film marked the filmmaker’s 70th movie and had Athulya, Vaibhavi in supporting roles.

Now the filmmaker is busy acting in some films as a supporting actor. For past few days, as BJP party is looking for ways to gain the support of Tamil cinema celebrities in order to win elections in the state, a speculation did rounds saying that S.A Chandrasekhar is going to join in the ruling party of central government.

Followed by that, a fake twitter account was created in the name of S.A Chandrasekhar. In that account, a tweet surfaced saying that himself and Vijay are reaching Delhi to join the BJP party. Now, denying the tweet, S.A slammed the miscreants who disguised and spread such rumours.

When a reported asked whether he gave complaint against the culprits, Chandrasekhar said that he is busy attending shooting for an upcoming film and said that he going to file a complaint soon. “For past 10 days, I am reaching the spot at 8 in the morning and leaving to home at 9 in the night. I will give complaint soon as soon as finishing the shoot” the filmmaker said.

“Beyond that, they are not humans at all. What they did for money is cheaper than doing prostitution.” he said in a frustrated tone.

On the work front, S.A Chandrasekhar is going to do a prominent role in Simbu’s “Maanadu”. He who directed Jai in his “Capmari” is also busy planning for his next directorial venture.

Previous articleCelebrities & Politicians Raised Voice Against The Culprit Who Made The Threat !!
Next articleVanitha Vijayakumar Broke Up With Peter Paul !! WATCH