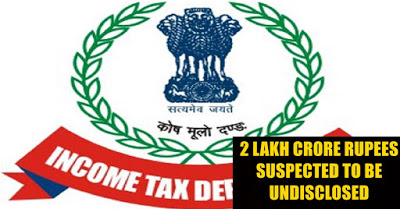 A family which has declared it’s undisclosed income amounting to Rs.65,250 crore has come under investigation. This was declared under the government’s Income Disclosure Scheme which was formed to flush out black money.

The declaration was rejected recently due to it being “suspicious in nature, being filed by persons of small means”.

Regarding the Sayeeds, the ministry said three out of the four PAN numbers were originally from Ajmer. These were migrated to Mumbai in September 2016, where the declarations were filed.

Here’s what has been issued by the Ministry of Finance.

Followed by "Don" and "Kantara", "Love Today" joined the list of movies which became a blockbuster during it's theatrical run but didn't go well...

Girl Woke Up At Her Funeral !! Case Filed Against Doctors

Three year old child woke up at her funeral after being declared as dead by the doctors. However, the child died moments later. Mother...

Mahesh Babu Watched “SARKAR” & His Reaction Is Winning Hearts Of Many !!

Sarkar ran into rough waters even before its release when Varun Rajendran accused director AR Murugadoss of plagiarising the story of his film Sengol. The...