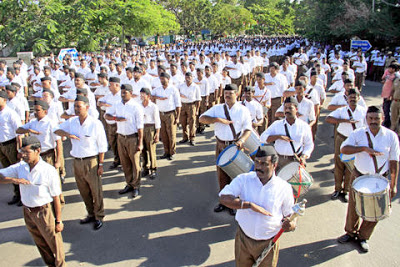 On Sunday, the route from Rajarathinam Stadium in Egmore to Chintadripet was filled with more than 1000 Rashtriya Swayamsevak Sangh (RSS ) cadres who carried out a march after 16 years. It was estimated that more than 1000 people of RSS participated in the protest to celebrate the anniversary of Guru Gobind Singh,Saint Ramanujan, BR Ambedkar and Subhash Chandra Bose.
The march which was organized by RSS chennai chapter, was for almost 2kms, with people wearing wearing white shirts and khaki pants with black caps.It is to be noted that similar marches took place in interior parts of Tamil Nadu such as Salem, Kanchipuram and Puducherry.

The New Indian Express, reported the confirmation of the presence of BJP state president Tamilisai Soundarajan with sufficient police in number. Moreover, the state government did not go against or challenge the court’s decision legally which resulted in a suspicion whether if the current government had a soft corner for RSS.

The Madras High Court had permitted RSS to conduct marches in 14 places in 2016 with cadres wearing full pants. After which,they had moved to the court after police and district administration denied permission.
Previous articleSingam 3 Joins The 100 Crore Club?
Next articleSupreme Court Unhappy in Jallikattu issue!!

This One Particular Meme Made ADMK Seniors To Restrict Vijaya Bhaskar ?? WATCH

For past few days, Health Minister Vijayabhaskar who was very much active since the Corona outbreak in tamilnadu, is missing. State Health secretary Bheela...

Wuhan, a city located in China where the first case of COVID 19 is registered, celebrated pool party yesterday only to leave the rest...

In a 50 minute long emotional video, Vanitha Vijayakumar admitted that she broke up with Peter Paul and made his habit of alcohol addiction...