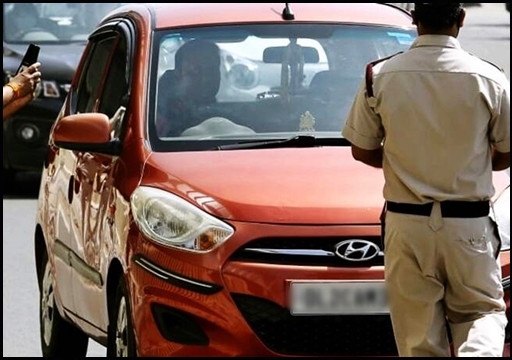 Chennai city corporation has enforced a COVID 19 protocol which demands a fine amount of Rs.500 from public who doesn’t wear safety mask. On Tuesday, a twitter user raised voice questioning the Chennai Traffic Police who collected Rs. 500 from her parents for not wearing a safety mask inside their own car. The tweet created a discussion among people who believe that the slapping fine on people who don’t wear mask even inside their own car is right and those who believe that it is a kind of an extortion. 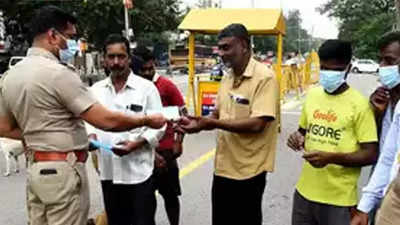 On 12th of January, the state health department has increased the fine for not wearing masks from Rs. 200 to Rs. 500 by amending the rules in the Tamil nadu public health act, 1939. The order which was issued by health secretary J Radhakrishnan gave authorities the power to fine people who do not wear mask covering their noses and mouths. The order came in to effect after all the scientific evidence and studies point out that wearing mask reduces the risk of transmission of the viral infection.

However, a twitter user, parents of whom paid Rs. 500 as fine for not wearing masks inside their own car, questioned how long the Chennai Traffic Police is going to continue such “extortion” in the name of enforcing COVID 19 protocol. “My parents were fined Rs.500 tonight near Royapuram bridge for not wearing a mask inside their own car. For how long will @ChennaiTraffic continue this extortion in the name of enforcing #COVID19 protocol?” she said in her tweet by adding the picture of the receipt issued to her parents.

“How exactly is a closed, private car with two people from the same house a ‘public’ place? Now we know what’s the pathetic reality behind all those 100s of crores of fines collected every day for Covid ‘violations'” read her next tweet.

How exactly is a closed, private car with two people from the same house a ‘public’ place? Now we know what’s the pathetic reality behind all those 100s of crores of fines collected every day for Covid ‘violations’. @chennaipolice_

The tweet garnered different kind of reactions from the users of the micro blogging social media site. A user argued that even a two wheeler driver could claim that he is not wearing mask in his own vehicle and said that Corona won’t know whether someone is in their own vehicle or not. He was countered by another user who asked whether CM Mk Stalin paid fine when he went for cycling in ECR without wearing a safety mask. Meanwhile, one more user pointed how governments are relaxing the protocols for election campaigns, rallies and meetings.

First of all, transmission in an open area is very very less. Also are they collecting the fine amount from ALL those who are not wearing the mask? Even @mkstalin was found without mask while cycling in ECR this week. Did he pay the fine? Why law works only with certain people?

Exactly. The super rich and Politicians will only be allowed to break rules.👇https://t.co/CIVOXvbeBn

That’s the place where i pass everyday at 10:30pm after duty – just a stone throw distance from where they do this checking , can find groups of people without masks and social distancing, chatting besides the rampant food courts of West mada church street!

What about TN CM cycling without mask?

Its just EASY for them to Levy Fine from PUBLIC in the Name of Safety. But when we raise issues on Bad Roads, Drainage, Dog/Mosquito Menace, Bus Shelter etc they are NOT Responding Properly. For them, ONLY Covid causes Death😀😀@CMOTamilnadu @Subramanian_ma @RAKRI1 @sumanthraman

U r instructed to wear a mask even when inside the car.. Then wats wrong.. #followrules

My father was fined Rs.1000 for not wearing mask inside the car because he was on a call and other person was finding difficult to hear it, he was caught because he stopped the car and then pick up the call 😶😶😶

Enforcing covid protocol is for your parents safety and your safety understand it https://t.co/2VtewB0uXD

@Subramanian_ma sir too many cases like these have come up… How come travelling on our own car without mask violates COVID protocol.. just because citizens on car are easy prey for 500rs fine this is happening very frequently. Kindly issue clear guidelines

It’s good that they had given receipt and that nothing untoward happened like the law student case . A computer receipt would have been more pertinent to make sure that money goes to the Treasury .இன்னமும் எத்தனை நாள் இந்த முரட்டு வசூல்னு தெரியல😏😏

This is the new ponzi. Corp. Lorry and workers around aren’t wearing mask, pedestrians aren’t fined. Cops inside the police station aren’t wearing mask. But motorcyclists and cars are fined over and over every in every corner. Extortion indeed.

Rs.500 is very high.
A good government shall provide a mask and collect fine below Rs.50.

@mkstalin @CMOTamilnadu Put an end to this madness. No use being an avowed atheist and a rationalist when you allow superstition like this. Not in my TN ! https://t.co/kiwhKhSfWN

Instead of Rs500 fine, can be given bunch of Mask with Rs100 fine https://t.co/yCHGzYd0Ap

Comment your views on people being forced to pay Rs. 500 as fine amount for not wearing mask while traveling in their own car !!

Mugen Rao who won the title of Bigg Boss season 3 faced the biggest loss of his life today and along with the fans,...

Disturbing video of a female fan named Sunitha, requesting the producer of Venkatesh's upcoming film "Naarappa" to make the film release in theatres is...

Rajinikanth Fans Got Disappointed On Kamal Haasan !! Check Why

Supertsar Rajinikanth fans got extremely disappointed on Kamal Haasan for not wishing their idol on his 70th birthday. They expressed their disappointment on a...