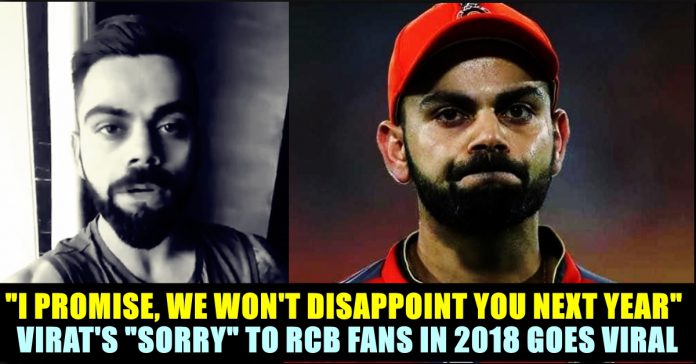 Royal Challenger’s Bangalore one of the powerful team in the tournament with having national team skipper in their side almost out of the tournament. Virat Kohli-led RCB are rooted to the bottom of IPL 2019 points table having won only 4 matches in the 12 games they played.

Only four times in the 11-year history of IPL have teams qualified for the playoffs (or the semi-finals) with 14 points after the league stages. Rajasthan Royals were the latest team to do so when they made the playoffs of IPL 2018 after winning seven matches in the group stages.

RCB have 8 points from 12 matches in IPL 2019 and there is no chance for them to reach 14 points which even if they win the remaining matches.RCB lost to Delhi Capitals in the last game they played where they could not chase 180+ runs. 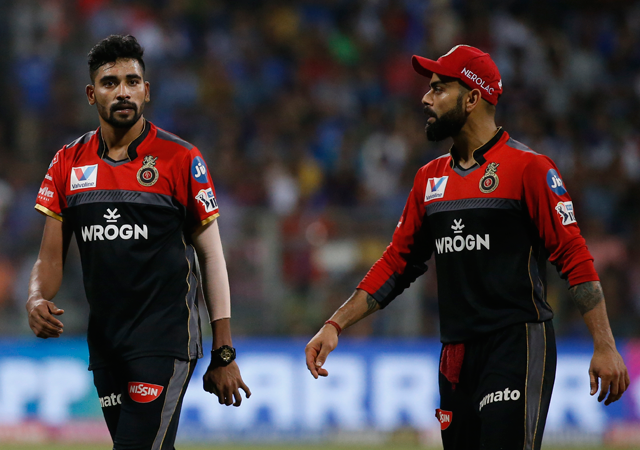 Meanwhile, a video from 2018 where the RCB skipper Virat Kohli promised RCB fans that their team will bounce back harder in the next season goes viral. In the video Kohli is seen asking sorry to the fans and asked them to keep supporting.

I really believe in the concept of, “you either win or you learn”. We fought hard and gave it our all but one thing is for sure, next season we definitely will bounce back stronger than ever with our learnings from this season.
Take care. @RCBTweets #RCB #IPL2018 pic.twitter.com/b0QM9chRAN

“We played a pretty good game I guess. With the ball, we weren’t that great in the first six overs but the guys fought hard in the middle overs and came back well,” Kohli said yesterday after losing the match against mumbai.

“It was a very important toss specially with how the wicket played. We showed a lot of character even after losing the toss, but it got away a little bit in the end. We were thinking 160-165 but 185 on that sort of a pitch, with three spinners, was always going to be tough,” the India captain said.

After a disastrous start, RCB kept themselves in the hunt for a play-off berth by winning four out of last six games.

“We put ourselves under too much pressure in the first six games and then it is always hard work in the latter half. So, we just decided to have a lot of fun and that’s why we won four out of the last six games we have played,” Kohli said.

“The important thing now, with two games left, is to go out there and have fun. Not take too much pressure. Obviously we want to perform as best as we can, but the fun factor should not go away. We have to go out there and play positive cricket. Once the last two games are done, we will sit down and see where the tournament had gone for us,” he added.

Previous articleBATA Punished For Making A Customer Pay Rs.3 For Carry Bag !! Check Out !!
Next articleSanjay Manjrekar Criticized Selectors For Choosing These Tamilnadu Players !! Fans From Tamilnadu Thrashed Him !!