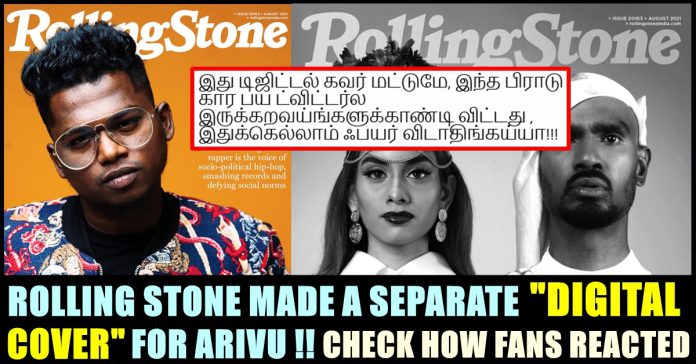 After the outrage caused by the users of Tamil social media platforms due to the non-existence of Arivu in the recent cover image of “Rolling Stone”, the magazine came up with “digital” cover featuring the independent artist alone. On seeing the post, many users of social media platforms came up with proud reactions with a number of them criticizing the magazine for releasing a “Digital” cover, that too after the online furore. Along with public, influential personalities such as Pa. Ranjith, C.S Amudhan, Samantha Ruth Prabhu, Chinmayi, Parvathy raised voice for the young and emerging talent, after the release of the magazine.

“BeyondBorders: Wordsmith, composer and rapper @TherukuralArivu appears on our August 2021 digital cover. Following acclaim for his album ‘Therukural’ with @ofrooooo, the Tamil artist has scorched a path out, raising his voice against systemic injustices” caption of Rolling Stone’s recent post read, cover image of which consisted one of Arivu’s close up picture. “The trailblazing Tamil rapper is the socio-political hip-hop, smashing records and defying social norms” it was written in the picture.

#BeyondBorders: Wordsmith, composer and rapper @TherukuralArivu appears on our August 2021 digital cover. Following acclaim for his album ‘Therukural’ with @ofrooooo, the Tamil artist has scorched a path out, raising his voice against systemic injustices

“Hey Rolling Stone India! What’s your problem? You just gave him space for the old album Arivu & Ofro made 2yrs ago but you still did not give credit for his great lyrics on Enjaay Enjaami and NeeyeOli(main). Better you don’t plug out any nail. We celebrate our Arivu ourselves” a commenter said on seeing the post whereas another asked people not to celebrate the post sayi9ng that it was released to pacify the users to Twitter.

Hey Rolling Stone India! What’s your problem? You just gave him space for the old album Arivu & Ofro made 2yrs ago but you still did not give credit for his great lyrics on Enjaay Enjaami and NeeyeOli(main). Better you don’t plug out any nail. We celebrate our Arivu ourselves

Too little, too late! Why not @TherukuralArivu on the physical cover of the next issue of your magazine? #RollingStoneIndia actively engaging in damage control without acknowledging what it got wrong in the first place #PaRanjith #ShanVincent #Arivu

This is just digital cover. Not magazine cover

So you guys will keep hiding talents, unless there is voice for them from the public?

Lol. You guys just marginalized @TherukuralArivu AGAIN while trying to fix the earlier one?!

First you ERASE him from his own story on your AUG cover (hard copy). Then you try to damage control the backlash by giving him this FALSE, TOKEN space on a fkn DIGITAL cover? R u daft?

That @beemji had to be vocal in the first place for this to happen is where we are as a society right now. We still have a long way to go. Says how key reservation is to the Indian society.#Arivu#Reservation https://t.co/lTNnlvqOwx

After all of us voicing out they have put Arivuv on cover but mentioning only about album 'Therukal' which is no doubt great hit. Still they didn't mention 'enjoy enjami' & 'Neeye oli'.

August 2021 cover of Rolling Stone Magazine which promoted the Independent music videos “Enjoy Enjaami” and “Neeye Oli” grabbed headlines after the authorities of the magazine decided not to use the picture of Arivu, the lyricist who wrote lyrics for both the songs. Along with director Pa. Ranjith, many people who became aware of the magazine’s cover has been calling out “Rolling Stone” through their tweets and reactions.

Along with singer Dhee, the magazine cover included Shan Vincent De Paul, a Canadian recording artist who worked in “Neeye Oli”. On seeing the cover, influential filmmaker Pa. Ranjith came up with a tweet condemning “Rolling Stone” and “Maajja”, an A.R Rahman backed music platform for failing to credit Arivu, a performer, lyricist, singer and rapper who worked in both the projects. It has been reported that “Rolling Stone” has interviewed Dhee and Shan before featuring them in their August cover. Now, the “Digital” cover released by the magazine has satisfied some and added fuel to the fire that already got intensified inside few.

Kasturi Shankar, who often faces harsh criticism online, has now got into a verbal spat with the fans of Tamil hero Chiyaan Vikram. The actress'...