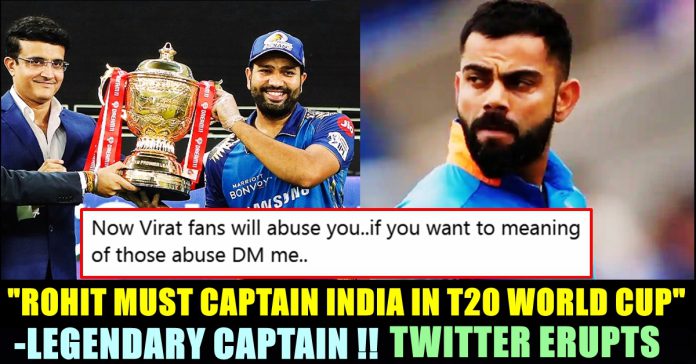 Rohit Sharma led Mumbai Indians successfully clinched the IPL trophy for the fifth time and defended the title they earned last year. He became the first batsman to win the trophy 6 times as a player and 5 times as a captain. Now, on seeing this achievement of him, twitter India raised questions on the captaincy of Virat Kohli who is yet to win a trophy for Royal Challengers Bangalore and is captaining team India in all the three formats.

While fans of both the cricketers are involved in verbal spat regarding the same, a statement made by Michael Vaughan, a former captain of team England who is known for his successful captaining career in International cricketer, added fuel to the fire. The cricketer who is currently involved in commentating, directly said that Rohit should captain team India in the upcoming T20 world cup tournament.

He said that it would give Virat Kohli a breather to be justa player and also added that it happens across the globe. He described Rohit Sharma as “Fantastic man manager” and “leader” who knows how to win T20 games. “Without question Rohit Sharma should be the Indian T20 captain .. fantastic man manager & leader .. & he knows exactly how to win T20 games .. it would also give Virat chance to take a breather and just be the player .. it’s works for all other teams around the world.” his tweet read.

Without question Rohit Sharma should be the Indian T20 captain .. fantastic man manager & leader .. & he knows exactly how to win T20 games .. it would also give Virat chance to take a breather and just be the player .. it’s works for all other teams around the world ..#IPL2020

He also tweeted that the Mumbai Indians would win the International T20 world cup. “I reckon the @mipaltan would Win the T20 World Cup …. #Justsaying #IPL2020final” his next tweet read.

I reckon the @mipaltan would Win the T20 World Cup …. #Justsaying #IPL2020final

This tweet of the former cricketer divided the users of twitter into two. Many abused him and few agreed with what he said. Check out some of the reactions below :

Boult joined this season
Rcb released him.
bumrah from last 3,4 seasons.. That too in the career beginning you can't consider bumrah as a top bowler.. Its the confidence they gave and made mi a strong team in all sections.

Mi was not born strong it grew up to be strong

Recovery needs
Since you haven't won 1 we are already 5

Seriously Man he took the team to semi finals..what did he do if top order batsmen choke ?

They have made them . Rcb(Virat) has same freedom to do so. They can buy players in auction and invest time in them . No one was stopping him to do so.

Few yrs ago he had… starc..abd…kohli himself… Chahal…. Gayle….. Still haven't won

All are talking mi is the best team so why other teams they do In auction time and rcb has also good bowlers and batsmen world class bowlers like Morris Stein and chahal and abd ,kohli, padikkal and also good players in rcb too why cant they win

On seeing these kind of reactions from the followers, Michael posted a tweet saying that he will stand with his decision. “Abuse coming but it’s true” he said in his tweet.

Comment your views on this opinion of Michael Vaughan !!

Previous articleSuresh Chakravarthy Opened For The First Time After Getting Evicted !!
Next articleSRH Coach Revealed How Mumbai Approached Them To Buy Rashid Khan !! WATCH

elebrities from all over the world are subject to online trolling on a daily basis. Social media is a place where almost every individual would...