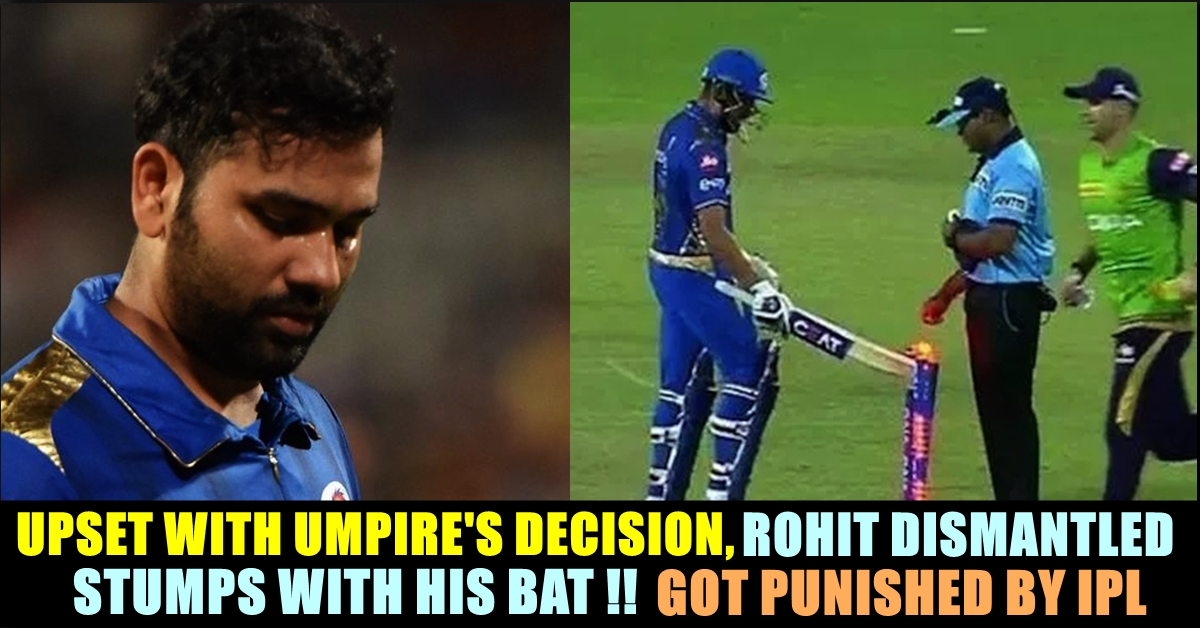 Mumbai Indians captain Rohit Sharma was fined 15 percent of his match fee for his gesture after being given out during their IPL match against Kolkata Knight Riders at the Eden Gardens, Kolkata on Sunday.

Expressing his frustration after being adjudged leg before wicket, Rohit hit the stumps with his bat at the non-striker’s end, violating the Indian Premier League’s code of conduct. Rohit admitted to the Level 1 offence 2.2 of the IPL’s code of conduct and accepted the sanction.

The IPL match between Mumbai Indians (MI) and Kolkata Knight Riders (KKR) at Eden Gardens will be remembered for a long time, especially for the innings played by Andre Russell and Hardik Pandya. Batting first, KKR put up a mammoth total of 232/2 on the board with the help of Andre Russell’s knock of 80* and Shubman Gill’s innings of 76 runs.

Chasing a mammoth target of 233, Rohit Sharma was dismissed for 12 by Harry Gurney in the fourth over. Rohit Sharma was given out LBW by the umpire but reviewed the decision. Replays showed that the ball was snicking the leg stump with the DRS decision going in favour of ‘Umpire’s Call’. If the umpire’s decision had been not out, Rohit Sharma would have survived as the ‘Umpire’s Call’ would have stood but that was not the case.

“Rohit Sharma, the Mumbai Indians batsman and captain, was fined 15 percent of his match fees for breaching the VIVO Indian Premier League’s (IPL) Code of Conduct during his team’s match against Kolkata Knight Riders at Kolkata,” an IPL media advisory read.

“Mr. Sharma admitted to the Level 1 offence 2.2 of the IPL’s Code of Conduct and accepted the sanction.” IPL made this statement in which it said that Rohit Sharma has accepted the sanction. Mumbai lost the match by 34 runs despite Hardik Pandya’s blistering knock of 91 for which he played only 34 balls. This was the second occasion when Rohit was guilty of breaching the IPL Code of Conduct this season. He was earlier fined Rs 12 lakh for his team’s slow over-rate against Kings XI Punjab.

The win against Mumbai Indians means Kolkata Knight Riders are still in the hunt for the playoffs. The maximum they can finish with is 14, but even that might not be sufficient, as there is a possibility of as many as six teams finishing on 14 or more.

The teams are playing hard to enter the playoffs and as of now, only CSK has confirmed its place in the knockout stage.