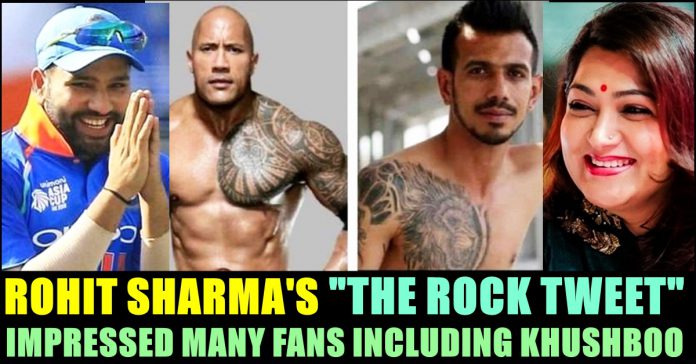 India won the series against Australia with a terrific run chase. Rohit Sharma helped team India to chase down the 280+posted by Australia on the board. After an impressive bowling performance, Indian batsmen Rohit Sharma, Virat Kohli and Shreyas Iyer helped the hosts secure the win with 15 balls to spare at the M Chinnaswamy stadium. Chasing a below-par target of 287, Rohit Sharma top-scored for India as he notched up his 29th century in the 50-over format. Rohit Sharma was well-supported by skipper Virat Kohli who missed out on his 44th ODI hundred by just 11 runs. Once Australia got rid of Rohit Sharma, Shreyas Iyer came out all guns blazing as India cruised to a seven-wicket win.

After the win, Rohit Sharma who loves to have a good time in online, has said that something else has grabbed the headlines, despite India winning the series. He compared the leg spinner and his dear friend Yuzvendra Chahal with WWE Superstar and actor Dwayne Johnson who is known as “Rock” in Wrestling world. In the pictures Sharma posted, we can see Chahal and Rock having similar tatoos.

In his tweet, Rohit wrote “Best picture I saw today. India wins the series but someone else takes the headlines. Bravo!!”

Best picture I saw today. India wins the series but someone else takes the headlines. Bravo!! @yuzi_chahal pic.twitter.com/dN0RXh05q9

As soon as Rohit shared this post, it went extremely viral among his followers. It received nearly one and half lakh likes in Twitter and eleven thousand retweets. Chahal who got excited, shared this post of Rohit as well.

This is not the first time, Rohit using his time to troll his fellow cricketer. Earlier, For a celebration post of Chahal, Mumbai Indian’s captain and Indian team vice captain Rohit Sharma trolled Yuzvendra Chahal in the comment section in a most hilarious way. He said “Pata hi nahi tha bhai.” (I didn’t know this friend)

As far as the performance of the cricketer is concerned, He said ““It was an important game, the decider, and we wanted to come out and enjoy ourselves. To keep that Australian batting under 290 was a great effort. Once KL got out, it needed nobody better than the captain himself. The talk we had in the middle was that one of us wanted to keep going,” after the match.