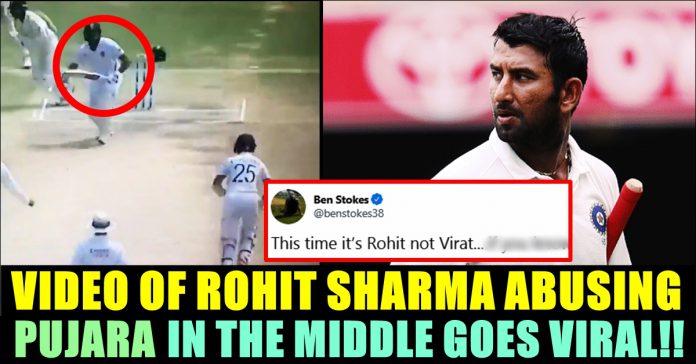 India had taken a commanding 246-run lead going into Tea, with Rohit Sharma and Cheteshwar Pujara looking dominant in the middle. India lost Mayank Agarwal early in the innings but Pujara and Rohit batted through the second session, upping the tempo in the middle, and they have built a quick 154-run partnership for the second wicket. Pujara fell for 81 to Vernon Philander early in the third session but Rohit Sharma is still going strong.

Frustrated by this behaviour, while returning to his crease, Rohit Sharma abused Pujara in Hindi which was caught in stump mic. Pujara who is well known for his slow and steady innings is also known for running slowly between the wickets. He didn’t want to risk his wicket for a single run. But Rohit Sharma who thought that there was a single shouted “Pujji bhaag b*****d, mai pohonch jaunga waha (Run Pujara, I will reach your end).”

However, this incident grabbed the attention of World cup hero Ben Stokes and you will know why after reading his tweet below :

This time it’s Rohit not Virat….if you know you know 😂

England all-rounder Ben Stokes, few months back, came out with a witty tweet regarding Virat Kohli’s north Indian curse word which was used by Rohit Sharma today, saying the cricketer uses the phrase rather than his name. The 28-year-old also said that it used to be funny but it is not anymore.

Stokes tweeted about how he is tired of being mentioned in tweets which suggest that Kohli actually pronounces the English all-rounder’s name every time he is celebrating on the pitch.

I may delete Twitter just so I don’t have to see another tweet reading “He’s saying Ben Stokes”(when he’s clearly not😆)in reply to a video of Virat saying you know what 🤦‍♂️🤦‍♂️it was funny the first 100,000 times.

Check out some of the reactions for Ben’s today’s tweet :

I guess the only Indian player who has never taken your name on the field pic.twitter.com/367a6Orfnq

Rohit remembers his friend @benstokes38 in middle of the match!
Such a good friendship 😍 pic.twitter.com/ziLpZRmtIk

Comment your views on Rohit Sharma’s activity in the middle of the pitch and Ben’s reaction to it !!

Previous articleCHERAN Trolled Kavin & Losliya Without Mercy In This Unseen Video !! MUST WATCH !!
Next articleMadhumitha & Family Uploaded Video Of Those 8 Housemates Harassing Her Inside The BIGG BOSS House !! WATCH VIDEO !!