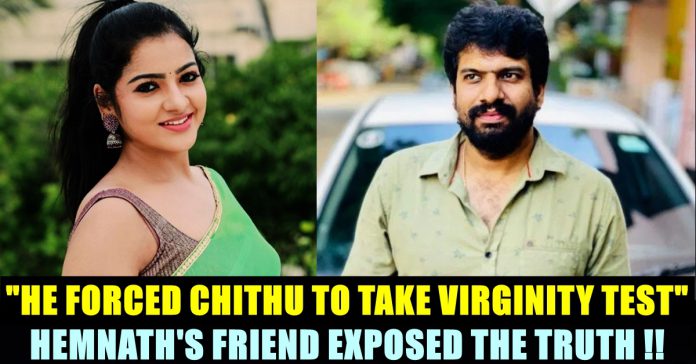 The Chennai Police has confirmed that the demise of TV actress Chithra was by suicide and revealed that Hemnath, her boyfriend caused her immense stress. The Nazarathpettai Police submitted a report to the Madras High court and accused Hemnath of abetment of suicide. The court was hearing his bail plea, said reports.

Chithra was found dead in a hotel room in Nazrathpettai on 9th of December. Several questions about the demise of VJ Chithra has been raising since the news about her death surfaced. After the picture of her body surfaced, bruises were found in her face which made public to doubt the cause of her death.

Earlier, reports suggested that Hemnath did not like Chithra performing intimate scenes in her serials and the reality dance shows that she used to perform. They had a nasty argument regarding the same, according to reports. Earlier, it was reported that Hemnath dropped by the sets of Pandiyan stores and scolded her. Chithra’s mother Vijaya firmly believed that her daughter would have never killed herself and demanded a fair probe.

Now, after the latest update on the case surfaced, Hemnath’s friend Rohit appeared for an interview with a private youtube channel and exposed the true nature of the accused. He said that Hemnath had relationships with several girls and always harassed Chithra for pairing with male artists. “He demanded her to stop acting in serials and insisted her to do Instagram advertisements and events alone” Rohit revealed. “He physically attacked Chithra many times and harmed her like a psychopath” he said.

“It all started when the channel conducted a pair dance. He doesn’t want her to pair with male artists and made calls to her while she was in shooting. He would threaten her to breach the shooting spots and she would leave the spot immediately in the fear of losing him. Love blinded her” Rohit said in the interaction. “He is the sole reason for her death. I want media channels to stop degrading Chithra’s personal character as she is dead now” he added.

At one point, Rohit went on to reveal that Hemnath tried to conduct “Virginity” test on the actress. “My wife is a doctor and he once asked her to conduct virginity test on Chithra. He also asked a doctor who was running a clinic in the apartment he was living. Chithra herself came to us and talked about it emotionally.” Rohit said.

On 15th of December, the police arrested Hemnath on charges of adetment to suicide. Hemnath moved a bail petition in the Madras High court on December 14. In the petition, Hemnath said that he did not force Chithra to quit acting nor did he raise suspicion over her character. The petitioner argued that the charges against him were baseless and so the court should give him bail, citing the reasons.

Meanwhile, Chithra’s parents and Rohit filed a petition against his release. “The court did not accept the petition of Hemnath’s friend since there was no locus standi and he was not related to the case. So, considering these, the court has adjourned the case to February 2 and for Central Crime Branch to decide on giving the bail” said Prabhavathy according to The News Minute.

This Beautiful Actress Proposed Trisha & Wants To Marry Her !! SHOCKING !!

Trisha Krishnan turns another year older today and fans have already made it one of the most trending topics on social media. In fact,...