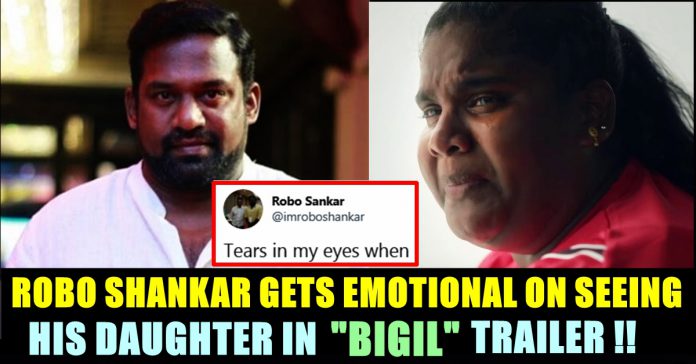 Vijay and director Atlee’s third collaboration, after the successful Theri and Mersal, has been titled Bigil. Fans of the actor have taken over Twitter yet again as the release date of Bigil’s release was announced on Twitter by producer Archana kalpathi. It is revealed that the film will be released on October 25, two days prior Diwali. The fans of Thalapathy have gone gaga over the news as they have been waiting for it for a long time.

Since the trailer of Bigil surfaced on Internet, fans of Actor Vijay from all over the world are reacting to it in a positive way and are trending it in social media platforms. As soon as the trailer released, it reached more than 1 million likes in a matter of minutes and is marching towards 3 million likes.

The film’s trailer which hints us about the film to be an emotional sports drama, has actor Vijay in three different get ups. Apart from Vijay, many other artists such as Nayanthara, Jackie Sheroff, Kathir were also made their appearance in the trailer.

As the movie is based on women football, 11 female players including Indhuja Ravichander were seen in the trailer. As we all know, popular comedy actor Robo Shankar’s daughter who is making her debut in the film, has also occupied a couple of frames in the trailer.

Robo Shankar who got emotional on seeing his daughter making debut in a high profile movie, Robo Shankar couldn’t resist himself from expressing his emotions. The actor, on seeing his daughter’s performance wrote “Tears in my eyes when I saw my daughter on #Bigil trailer. Thanks Atlee sir and Vijay sir for giving her a great opportunity to work with you. And the trailer looks fantastic” in his tweet.

And the trailer looks fantastic

Robo Shankar who has became a significant comedian in Tamil film industry, was last seen in Viswasam. He has a handful of films such as Kalathil Santhippom, Kanni Rasi etc.

Produced by AGS Entertainments, Bigil has Nayanthara as lead lady. Kathir, Vivek, Yogi Babu, Indhuja Ravichander, Jackie Sheroff, Daniel Balaji are some of the other actors took part in the film. It is notable that the movie marks the third collaboration between Atlee and Vijay after Theri and Mersal.