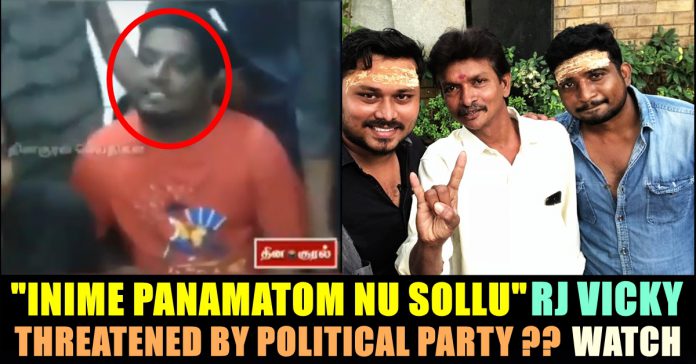 RJ Vigneshkanth is one of the popular youtuber in Tamilnadu. He also started his career in Tamil cinema as comedian in Hip hop Tamizha’s Meesaya Murukku movie. Starting his career as radio jockey, Vignesh kanth now owns two youtube channels and named them as Black Sheep and Unakennappa. His black sheep crew led by Karthik Venugopal directed a movie named as “Nenjamundu Nermayundu Odu Raja” by having former anchor Rio as protagonist. The film was produced by actor Sivakarthikeyan and it did well in the box office.

RJ Vignesh kanth and crew are also known for their socially responsible videos. They raised voice for several issues that took place in Tamilnadu and expressed their stand in humorous way through their videos. Their satire videos on current political state made waves among Internet users. Now a shocking video of RJ Vignesh kanth getting threatened by a group of men surfaced in the micro blogging social media site.

CTR.Nirmal Kumar, a state president of BJP shared the video by tagging DMK’s official twitter handle. In the video we can see a group of men forcing RJ Vigneshkanth to ask apologize for posting a certain video. The video was shot during Smile Settai times it seems. Nirmal Kumar blames DMK party for the threatening, video of which is being shared by many. Watch the video here :

Followed by this, an audio conversation of RJ Vigneshkanth with a journalist also surfaced in Twitter. Vignesh confirmed to his audience that it is a prank video shot long back. “It is a video shot for “Fun Pandrom” planned by me and “Fun Pandrom” team to prank the crew members in our office. It was shot to capture the reactions of them during Smile Settai times. ” said RJ who confirmed that it was not released to audience for certain reasons.

“Now we have changed our office and changed several hard disks. I don’t know who edited it to release but they chopped it perfectly to create such rumours” he added in the audio conversation. Listen to the conversation below :

On the work front, RJ Vigneshkanth and crew are all set to make their debut production. “Micset” fame Sriram and Ayaz are going to play the lead roles in the school based comedy drama. The launch took place in the presence of veteran producer and founder of “V Creations” Kalaipuli S Dhaanu.

What do you think on this rumour being spread ?? Comment your views below !!

Previous articleVideo Of Suriya Shedding Tears For A Student Goes Viral !!
Next articleWhen MGR Removed Vijay’s Father From His Film !! Must Watch !!

Team Royal Challengers Bangalore once again choked and failed to go near the IPL trophy in the 14th edition of the Indian Premiere League....