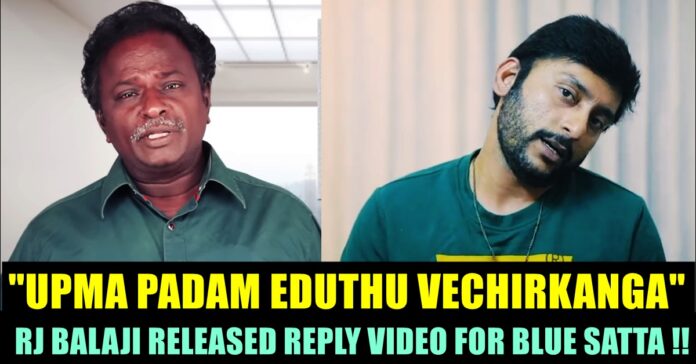 The film got released on 17th of June with much expectations as it is a remake of Bollywood blockbuster film “Badhaai Ho” starring Ayushman Khuranna. In his review, “Blue satta” Maaran said that the film didn’t do justice to the original version and the performances of the actors looked artificial, despite being seasoned ones. Maaran went on to call the film as “Upma Padam” pointing out the making of it.

“The whole film looked like a serial. First half of the film was “Soora Mokka” and emotions in the few scenes in the second half worked a bit” said Maaran who also compared the film with “Bro Daddy” of Malayalam. “If you are not a person who watch other language movies, you would feel that the film was good but could have been made better”  the reviewer further said.

In response, RJ Balaji, in a video he released in his twitter handle, said that the film was profitable for the producer and the audience are also happy after after watching it. Letting the theatre owners of Vettri, Ram Muthuram Cinemas, Rohini Silver screen speak in the video about the impact “Veetla Visesham” made in their theatres, RJ Balaji talked about the success of the film.

“We are extremely happy on seeing theatre owners expressing their gratitude. If you ask me about how the audience are enjoying, the videos of us visiting the theatres across the state and the videos that are surfacing in Instagram, Youtube are examples for it. Producer is also happy already and has got profits already. When we approached him for a “Thanks Meet”, he immediately started the work to hire a hotel” Balaji said.

Further, Balaji imitated Blue Satta Maaran and said “I already said that it is enough to impress the audience for whom we made the film. So, I am happy if this film gets appreciation from public people and we don’t need any “Blue Shirt” to like it”

balaji’s reply caught the eyes of “Blue Satta” Maaran who came up with a counter tweet in his official twitter handle. Maaran added the screenshots of the comments that slammed Balaji who also reviewed movies and bashed them prior entering cinema industry as an artist. He also added the link of his “LKG” movie review for which he made generally positive points.