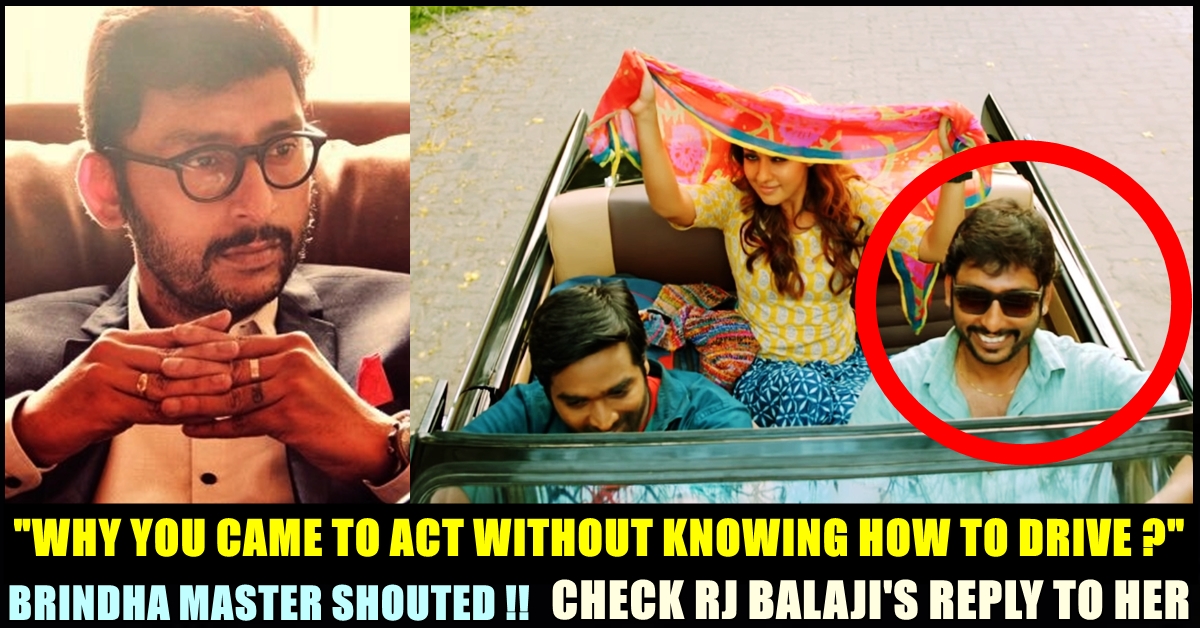 RJ Balaji who started his career as a radio jockey, is currently busy acting in movies for Kollywood film industry. He who also gets himself involved in direction department, started his acting stint as a comedian. During the initial stages, he acted in films such as “Theeya Vela Seyyanum Kumarru”, “Vada curry”, “Yatchan”, “Ivan Thandhiran” as a comedy actor.

In his recent interaction with Film companion South’s Baradwaj Rangan, Balaji shared on how he handled a situation in a shooting spot where he was humiliated for not knowing how to drive a car. He who is known for his witty counters and instant one liners, replied to choreographer Brinda in his own way and shared about it, video of which is going viral in social media platforms.

RJ Balaji needs no introduction to the people of Tamilnadu as he is a popular radio jockey, presenter, comedian and actor based in Chennai. He is best known as the host of the BIG 92.7 show Cross Talk, where he made prank calls to unsuspecting victims. After appearing few films as comedian RJ Balaji made his debut as protagonist in his L.K.G film which received positive response from the audience which resulted as success in box office. After that he acted a lead in “Mookuthi Amman” which also became a hit and he recently announced about the wrap of his upcoming film which is believed to be the remake of Bollywood blockbuster “Badhai Ho”.

It’s a WRAP for #TeamRJB3 !!! 40 days !!! Thank you God, my wonderful team and the people of Coimbatore for an amazing shooting experience..! We promise you, one of the biggest family entertainers of 2022 !!! ❤️ pic.twitter.com/bBUVtVSOSZ

While talking about what all he dislikes to Baradwaj Rangan of Film companion South, RJ Balaji said that he doesn’t like/know driving and also he dislikes “dance” as he doesn’t know about it. While talking about his driving skills, Balaji shared about an incident that took place at the shooting spot of “Naanum Rowdy Thaan”. “It has been 20 years since I drove a car. In “Naanum Rowdy Thaan”, there will be one romantic song which goes like “Neeyum Naanum”. Along with Nayanthara and Vijay Sethupathi, I also appeared in that song. My friend was the director of the film. He came to me and asked me to drive the car while Brindha Master was choreographing the song” RJ Balaji started sharing about the incident.

Watch the full interaction between RJ Balaji and Baradwaj Rangan below :