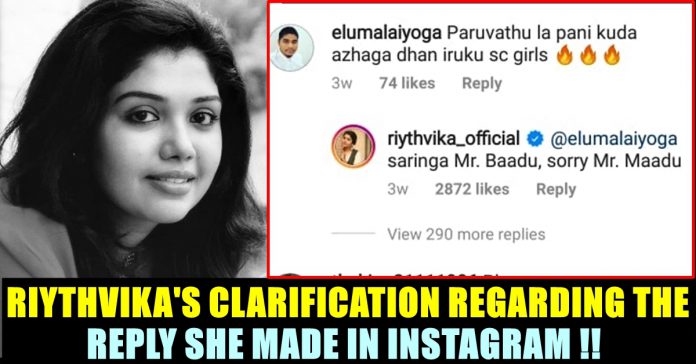 After the reply made by Riythvika in Instagram to a offensive follower blew up in other social media platforms, the actress now came up with a clarification. In a recent Instagram post of the Bigg Boss winner, one of her 3 lakh followers named as “Elumalai Yoga” posted a comment abusing a particular community. Riythvika who replied to such mockery in the past, didn’t spare the abuser to get away with what he done. Now, she came up with a note requesting the people to try living as humans in a casteless society. The actress also said that she didn’t get the privilege of being a “Dalit” and worried for being a girl from the sinful dominant caste.

“I would have been even more happier if I was born as a “Dalit”. What can i do ?? Unfortunately I didn’t get that happiness. I am also a girl who born in a sinful dominant caste which was involved in persecutions in the past. I feel sorry. Let us try to live in a casteless society as humans at least from now on. Wait. In a way I am also a Dalit” said Riythvika in her post.

“If people who are getting oppressed are identified as Dalit, then I am a Dalit too as I am a woman. We got oppressed by men for years and years. Yes Dalit. You men are responsible for making us “Dalits”. Thanks for your compliment on your looks. P : S : Dalit girls are much more prettier than me” she added.

Here’s the note the actress wrote in Tamil language :

In a recent post of the “Madras” actress, a user named as “Elimalai Yoga” mentioned a caste name and said that even pigs would look cute when it is young. This regressive comment was backed by 74 Instagram users is the saddest part of it. However, Riythvika who thought of giving him back called him as a pimp indirectly. She wrote “saringa Mr. Baadu, sorry Mr. Maadu” in her reply comment.

Two years back, when Riythvika won the title of Bigg Boss show, many people were in desperation to know about her caste it seems. At that time, In a way of replying to them, the actress wrote “To all those who search for Riythvika’s caste, To all those who criticizing me by saying that I won Bigg Boss title just because I belong to a particular caste, I did not belong to any caste. You find out my caste by searching in your own caste drainage” to shut them all down.

Previous articleVanitha Vijayakumar Says That She Sees Peter Paul As Her Child !! WATCH
Next article“My Father Always Looks Out The Best For Me” – Shanthanu

Woman Refused To Get Help From Muslim Vodafone Employee !! Got Thrashed Brutally !!

Almost every one of us dreaming of a atmosphere where no religion or caste partiality between common people exists. But a very few who...

Cases for abusing women and portraying them badly (509), profanity (294 B), Misusing information technology, using banned mobile application has been filed against youtuber...