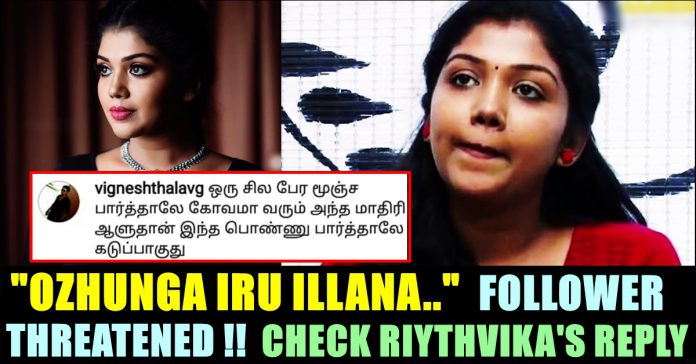 Riythvika Responded To A Guy Who Criticized Her Looks !!

Recently Riythvika grabbed headlines for shutting down a troll which said that she is being active in Instagram because of getting no movie chances. Now the actress again replied to the trollers who posted negative comments in her recent Instagram posts. The emerging actress, rose to fame among Tamil audience for her appearance in Bigg Boss Tamil reality game show,. She debuted in Tamil cinema through Pa.Ranjith’s “Madras”. She continued to act in his “Kabali”, Irandam Ulagaporin Kadaisi Gundu” and in few other films. She won the title of Bigg Boss show by getting highest number votes comparing to her other housemates who are also actors and model.

The actress who is very much active in Instagram enjoys nearly three lakh followers in Instagram. In one of her recent post, Riythvika promoted a social media app called as “Helo app”. In the picture, she striked a pose with a wide smile in her face. Check out her post here :

Though the post received more than Ten thousand likes from her followers, a follower spewed hatred at the actress by saying that he face is irritating. “While seeing some people’s faces, we would get angry for reason. This girl has such face” he said in his comment. “ஒரு சில பேர மூஞ்ச பார்த்தாலே கோவமா வரும் அந்த மாதிரி ஆளுதான் இந்த பொண்ணு பார்த்தாலே கடுப்பாகுது” his comment read.

Riythvika who saw this comment, decided to give a fitting reply. The actress trolled him back by asking him to see his face in mirror. “If you are alive after seeing your face in the mirror, you can talk” she said in her comment.

Here’ s the screenshot of her reply :

Followed by this, The actress who acted in Sibi Raj’s “Walter”, uploaded a picture of herself, in a way of promoting the film. In the post, Riythvika is seen wearing a green tops with an adorable smile. Check out her post below :

In this post, a guy asked Riythvika if she is a woman. Unlike the previous troller, this random Instagram using guy went one step ahead and warned the actress to behave well. “We will ban your movies in our place” he said. Check how Riythvika replied to him :

Previous articleFollowers Called Ritika Singh As “Noodles Manda” !! Check Her Reply To Them
Next articleVishal Warned Producers About Mysskin !! Check This Producer’s Reply

A Chinese boy,Xiao Wang is so ill that he is bedridden for life.You will get astonished after hearing the reason why.Wang was just seventeen...

Petrol, diesel prices saw another big cut on Tuesday after which petrol prices fell below Rs 80 per litre mark in Mumbai for the...