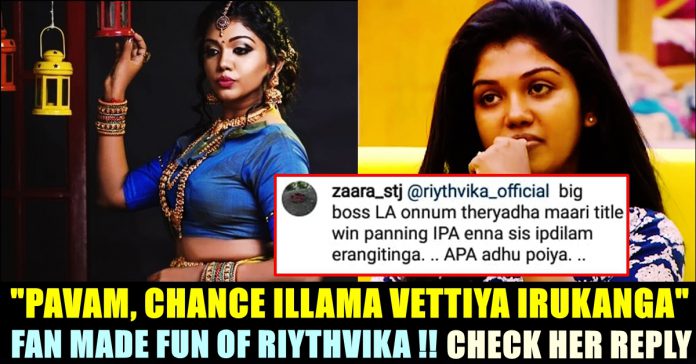 Actress Riythvika who rose to fame among Tamil audience for her appearance in Bigg Boss Tamil reality game show, debuted in Tamil cinema through Pa.Ranjith’s “Madras”. She continued to act in his “Kabali”, Irandam Ulagaporin Kadaisi Gundu” and in few other films. She won the title of Bigg Boss show by getting most number votes comparing to her other housemates who are also actors and model.

She is one of the many actresses who are very much active in social media platforms. Having nearly three lakh followers in Instagram, Riythvika is keeping her followers busy by posting photos from her various photoshoots. Being studied in Teynampet SIET college, Riythvika is one of the very few Tamilnadu based heroines in Tamil film industry.

As we all know, Internet is not a place to expect 100% positivity. In a recent post of Riythvika, one of her follower trolled the actress by saying that she is being jobless without movie offers. Riythvika uploaded a couple of pictures of herself in Gym with a caption saying “If nothing changes, nothing changes. When our mindset changes, everything can change”

To this post, the Instagram user whose name read as “Jaiganezh” said that he feels pity of Riythvika as she is jobless. “Iyo paavam padam vaaippu illama vettiya irukkanga” read his comment.

The Bigg Boss celebrity who saw this comment, took time to shoo him away from her Instagram account. The actress who is known for his calm and composed behaviour said “muditu poda” with middle finger emojis to shut him down. The comment of Ryithvika received 47 likes so far.

Riythvika is also known for her outspoken attitude in Bigg Boss house. This comment from the emerging actress, indeed surprised her other followers. One of them asked if she faked her character in Bigg Boss and few of them supported the comment of the actress as well.

“All Feels Like A Dream” Says Karthick Subbaraj After Seeing The Exclusive Update Of Rajinikanth About “PETTA” !!

Two months after his last tweet, Rajinikanth has finally returned to the Twitter. Tweeting about his upcoming film Petta, Rajinikanth announced that the shoot of the...

Here’s What Whatsapp & Instagram Has To Say After The Global Outage !!

On the night of Friday, Facebook owned Messenger, Whatsapp and Instagram abruptly stopped working for over half an hour globally. The outage was first...