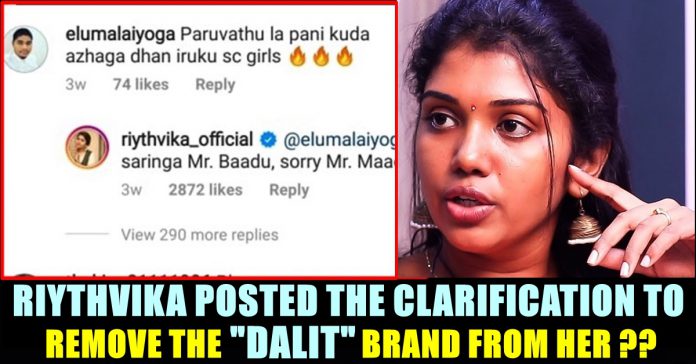 Actress and Bigg Boss winner Riythvika appeared in a face to face interaction for the first time after the controversial reply she made in Instagram. She said that her skin colour made people to judge her caste and community in the interaction. Riythvka said that it is in their subconscious mind which makes them to post such comments.

In a recent Instagram post uploaded by the Bigg Boss winner, one of her 3 lakh followers named as “Elumalai Yoga” associated her with a particular community and posted a comment abusing her along with the community. Riythvika who replied to such mockeries in the past, didn’t spare the abuser to get away with what he done. In that post, a user named as “Elumalai Yoga” mentioned a caste name and said that even pigs would look cute when it is young.

This regressive comment was backed by 74 Instagram users is the saddest part of it. However, Riythvika who thought of giving him back called him as a pimp indirectly. She wrote “saringa Mr. Baadu, sorry Mr. Maadu” in her reply comment.

After that, she came up with a note requesting the people to try living as humans in a casteless society. The actress also said that she didn’t get the privilege of being a “Dalit” and worried for being a girl from the sinful dominant caste.

“I would have been even more happier if I was born as a “Dalit”. What can i do ?? Unfortunately I didn’t get that happiness. I am also a girl who born in a sinful dominant caste which was involved in persecutions in the past. I feel sorry. Let us try to live in a casteless society as humans at least from now on. Wait. In a way I am also a Dalit” said Riythvika in her post.

“If people who are getting oppressed are identified as Dalit, then I am a Dalit too as I am a woman. We got oppressed by men for years and years. Yes Dalit. You men are responsible for making us “Dalits”. Thanks for your compliment on your looks.

P : S : Dalit girls are much more prettier than me” she added.

Here’s the note the actress wrote in Tamil language :

Now, in this interaction, Riythvika said that many blamed her for the above note saying that her intention is to remove the “Dalit” brand from her. “However, many people understood the context of my tweet. I’m happy for that” she said. When she was asked whether her repeated collaboration with Ranjith is the reason behind the abuser’s mindset, Riythvika said that Ranjith is not a person who picks people from “Dalit” community alone to cast in his films, though he makes films for them.

On talking about why she regrets for not being a “dalit”, Riythvika says that she could live with peace without thinking about the sins committed by her ancestors.

Previous articleJUST IN : Lakshmy Ramakrishnan Demanded Compensation From Vanitha !! Check How Much !!
Next articleBJP Kalyan Asked The Address & Phone Number Of This Girl !! Internet Reacts

The most anticipated "Methagu" film which portrays the life of the founder and leader of Liberation Tigers of Tamil Eelam, Velupillai Prabhakaran, released recently...

In a recent interaction with a youtube channel, Vijay Sethupathi expressed his admiration over actor Manikandan who said he couldn't achieve his dreams in...