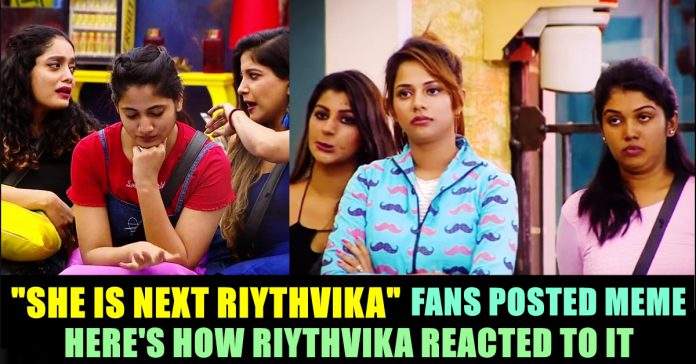 The 15 contestants of current BIGG BOSS season includes 8 female contestants in which Sri Lanka based Losliya grabbed the attention of the netizens due to her cute looks. Being newsreader from Sri Lanka, Losliya is quite popular in her country. She was the second contestant to be introduced by Haasan, who presented her with a medal.

The third season of Bigg Boss Tamil went on air on Sunday. The Tamil version of popular reality show Bigg Boss is hosted by actor-turned-politician Kamal Haasan and he will host this season too. Aarav won in the first season of the show and Riythvika emerged as the winner in the second season. As two of the Bigg Boss seasons were considered as big time entertainment by Tamil audience, the third part part of the show is just five days old as of now.

Riythvikha who is known for her appearance in films like Madras, Kabali is yet to play as full length female lead in a movie. The actress is very much active in social media. Losliya who doesn’t involved in any of the quarrel inside the house yet which resembled the behaviour of Riythvika in previous season. Riyithvika is also attracted the fans with her determined nature in tasks and for being neutral in the decision she make. On seeing Losliya’s behaviour in these 4 days, fans started to compare her with Riythvika and they also started to create memes.

Using “Chandramukhi” template, one of the bigg boss fan, created a meme saying that Losliya completely transformed into Riythvika by ignoring negativities. What more important is, the title winner herself posted it in her Instagram story in a way of accepting the fact. She is currently working on projects including Odavum Mudiyathu Oliyavum Mudiyathu, and an untitled biopic of actor-politician MGR, where she essays the role of Janaki Ramachandran. For the latter role, Riythvika carefully studied the habits and behaviour of Janaki, including by watching her old films. She is also working in Pa.Ranjith’s next production which was named as “Iranda Ulagaporin Kadaisi Gundu”. The first season of Bigg Boss marked the debut of Kamal Haasan on television. The show is back to entertain the audiences the third time. Like the previous seasons, Bigg Boss Tamil 3 will also test various skill sets of 15 contestants inside a safehouse without any mobile phones and any sort of contact with the outside world.

What do you think on Losliya winning the Bigg Boss title like Riythvika ? Comment your views below !!

“People Offering 1 Crore For Me Per Night” Says This Actress !! SHOCKING !!

Sakshi Chaudhary is an 25 year old Indian model and film actress, born in Dehradun, Uttarakhand. She was the winner of the Gladrags Megamodel...

Mr. Raahul, Executive Producer of "Thunivu" movie has been replying to the trackers and reviewers who are posting about the box office performance of...

This Message From Sivakarthikeyan To Vijaysethupathi For His 25th Film Winning Hearts !! Check Out !!