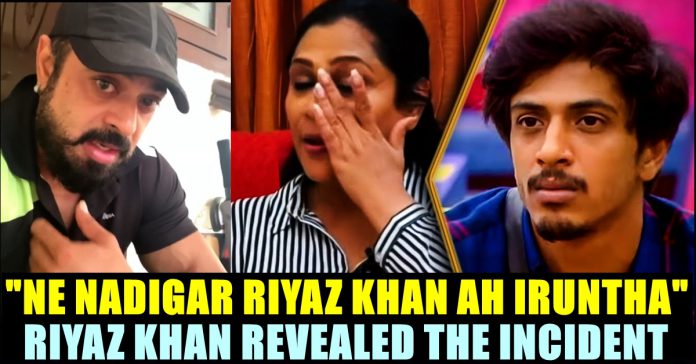 After so many speculations, actor Riyaz Khan, himself came up with a clarification on what happened between him and a mob. The news was about Riyaz Khan getting beaten by a person for advising him to maintain social distancing. COVID 19 which killed more than 96,000 people is a serious threat across the world right now. To avoid community spread in India, Prime minister of the country asked people to stay home for 21 days which is till April 14. However, to kill boredom, many people are roaming around without considering the announcement made by the central government.

On 9th of April, a news surfaced saying that actor Riyaz Khan got beaten up by a mob for asking them to quarantine themselves. Now the actor himself came up with a selfie video to give clarification on the same. “I would like to share an incident that happened to me day before yesterday. As my house is a corner plot, we have roads on both the sides. Around 5 o clock, when I was drinking coffee in my balcony, I saw ten people standing there near my house. I asked them where they are going at that time and they said that they came there to breathe some air. I said that it is not a right thing to do at this time when the government has announced lockdown” said Riyaz Khan who went on to explain further regarding the incident.

“When I asked them where their house is, they said that it is in the other side of the road. I asked them to breathe in their home’s terrace. They kept arguing with me. They confronted me by saying that they are not standing in my house but in a road. They didn’t understand what I was saying.” he added.

“If you are an actor, be it in cinema, we don’t care, Corona can’t infect us” they said to Riyaz Khan according to him. Riyaz Khan further explained how they attacked him for asking them to maintain social distancing. Watch the video he uploaded below :

Many influential personalities including politicians who are in power and celebrities who have huge fan base are advising people to stay home and to be quarantined. This doesn’t stop few people from going out and having fun with their closed ones. It is high time for people who are roaming around to have a look at the death toll caused by Coronavirus.

Riyaz Khan’s wife and popular actress Uma Riyaz came up with a post confirming that her husband is safe :

This is really sad that people dont take covid 19 serious and dont understand 144 act.. But my husband is safe.

Riyaz Khan who married to actress Uma in 1992, has two sons Shariq Hassan and Samarth Hassan. Shariq is known among Tamil tv audience for appearing in Bigg Boss show hosted by Kamal Haasan. The actor recently signed to play an important role in Manirathnam’s Ponniyin Selvan and the shooting of the film got suspended due to the Corona outbreak. This news about the actor is doing rounds in social media platforms where people are showing their concern towards the actor.

Previous articleYoung Hero Got Upset On Seeing This Comment !!
Next articleNot Shankar Or A.R Murugadoss, This Young Director Is Getting The Highest Pay !!

Priyanka Chopra Mentioned About Her First Co-Star Actor Vijay In Her New Book !!

Actress Priyanka Chopra, in her book "Unfinished", spoke about her debut film "Tamizhan" and about how she learnt humility from her co-star Vijay. The...

Man Blamed Pollachi Victim For The Rape & Warned Girls !! Chinmayi Comes Up With A Reply !!

Hundreds of college students, lawyers and members of women’s organisations in the State took to the streets demanding action against the accused in the...