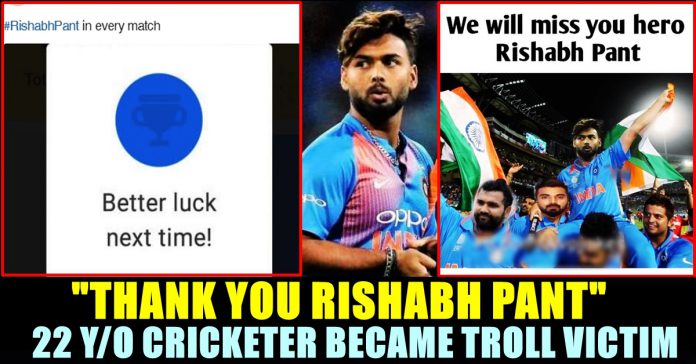 Rishabh Pant’s entry into team India in the recent West Indies T-20 series is a controversial one as many fans of Indian cricket team wanted Kerala wicket-keeper batsman Sanju Samson to get an opportunity. Though he disappointed to elevate the successful opening gave by Rohit Sharma and KL rahul by getting out in the very second ball he faced, Indian skipper’s terrific knock helped team India to put a mammoth target of 240.

After losing the 2nd T20I in Trivandrum, India opted for a power-hitting approach from the start of the innings, ending up hitting 16 sixes in total. Virat Kohli who smashed an unbeaten 94 in the first T20I to help his side chase down the mammoth total of 207 in Hyderabad. In the decider on Wednesday, the right-handed batsman hammered 71 not out in just 29 balls with the help of 7 sixes and 4 fours which helped team India to win the series.

Fans became extremely happy on Team India winning the series but it didn’t help Rishabh Pant from getting trolled by them. He became the subject of severe trolling due to his poor performance in T 20s. The twitter post of him celebrating the victory of team India added fuel to the trolling.

In his post Rishabh wrote “Great series win at the Wankhede 💙Jai Hind” Check out his post below :

Check out some of the reactions he is receiving since his failure in third T20 :

Big boss & Rishab pant are very similar.
.
.
Everyone tries to ignore them but they can’t!!!!#INDvWI

Thank You Rishabh Pant, We will never forget your contribution to the Indian Team 🙏 #INDvWI #ThankYouPant pic.twitter.com/wCYn24PzsZ

I was a big fan of Rishabh Pant…

Rishabh Pant Seems To Be Having A Reservation Certificate And Sanju Samson Seems To Be Belonging To The General Category.!!! #INDvsWI

Rishab Pant getting out on Duck 🦆 0. Vikart Kohli – giving him chance to play at 3rd. #RishabhPant pic.twitter.com/Enqr4blqK4

It is notable that Virat Kohli let Rishabh Pant to play at one down positon to prove himself. Despite his struggles to get going with the bat and the ordinary glovework, Pant has found the backing of the team management. However, a section of fans on social media have not been happy, especially when an in-form Sanju Samson is warming the benches.

We can also hear them chanting “Dhoni, Dhoni” when they see him exhibiting an ordinary glove work behind the stumps. What do you think on these trolls targeted against Pant ?? Comment your views below !!