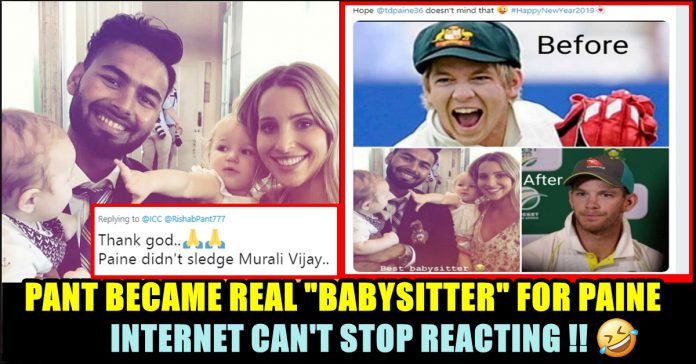 Rishabh Pant, on Tuesday, set social media on fire when Bonnie Paine, wife of Australia skipper Tim Paine, posted a photo of the India star holding one of her children in his arms with the caption ‘Best Babysitter’. The ‘babysitter’ sledge was one of the highlights of the third Test between India and Australia in Melbourne. In a cheeky attempt to unsettle Pant during the second innings, Paine had tried to sledge him. The Aussie keeper-captain had tried to get under Pant’s skin by reminding him of MS Dhoni’s inclusion back in the ODI side and his exclusion, telling him they could use him at Hobart Hurricanes in the Big Bash League. He had also asked Pant whether he could babysit his children while he takes the wife out for movies.
[wp_ad_camp_1] 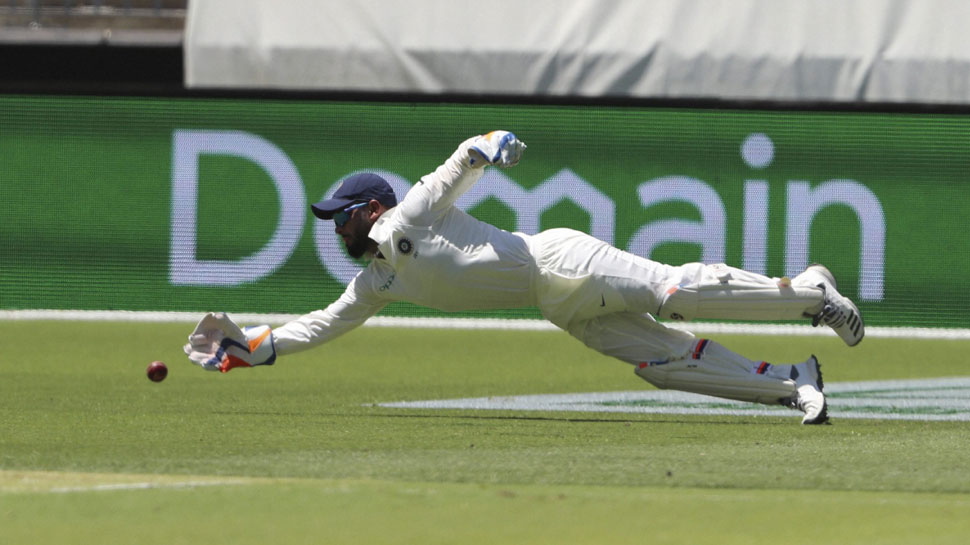 “Tell you what big MS is back in the one day squad. Should get this bloke down to Hurricanes.. They need a batter. Fancy that extend you Aussie holiday, beautiful town Hobart too… get him a water front apartment. Have him over for dinner. Do you babysit? I can take my wife to the movies while you watch the kids,” Paine had told Pant. The Indian keeper just accepted the challenge by posing alongside Paine’s wife and two children.

Tim Paine to @RishabPant777 at Boxing Day Test: “You babysit? I’ll take the wife to the movies one night, you’ll look after the kids?”

As soon as the picture released, the reactions from twitter are hilarious. Check out some of them here :

But he’s still not playing for us @tdpaine36? What’s with that? 👀

Rishabh Pant has a safe pair of hands 😊😊😊

Tim Paine had sledged Pant asking him at the MCG if he could babysit.

Tim’s wife Bonnie has given her verdict on Pant. She posted a story on Instagram and says Pant is the “best babysitter.”#AUSvIND pic.twitter.com/C6obqvTDsm

As Rishabh Pant has proved to be The Best BabySitter, will Tim Paine prove to be a Temporary Captain??#AUSvIND

Love this – brilliant and how good is the banter @BCCI @CricketAus 👍🏏

Rishabh Pant taking it to the next level! 😂 #AUSvIND
Hope @tdpaine36 doesn’t mind that 😜 #HappyNewYear2019 pic.twitter.com/cKCdn13OA6

Paine gone for movie with pain, Pant looks after Mrs. Paine and kids….

This would have been a heart attack for Paine @tdpaine36 pic.twitter.com/ktrJOuatqh

Now waiting for the next challenge on stumps mike 💪😂😂

There will never be a better response to a sledge than this. Well played Rishab Pant. https://t.co/if592UcjMZ

Previous articleEver Joked Of “Selling Your Kidney” To Buy An iPhone ?? This Guy Actually Did It In Real Life !!
Next article“I Could Not Do A Single Film For 14 Years Because Of Simbu & His Family” Manmadhan Director A J Murugan Accused Simbu !!