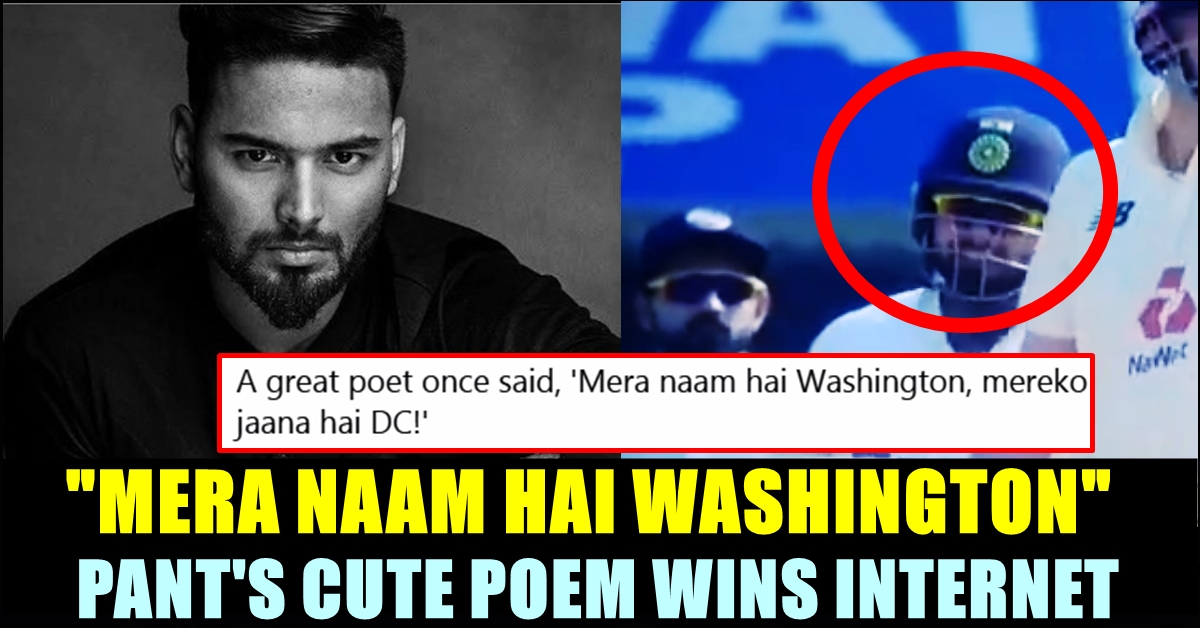 While team India is having a hard time out there in the field, the ever-cheeky Rishab Pant’s cute poem about “Washingtom Sundar” wins Internet. The video went insanely viral in the internet and left the fans of Indian cricket team in splits. Rishab who is known for making strange noises from behind the stumps while keeping the wickets, grabbed the headlines of news portals two years ago for his comment on “baby sitting” Tim Paine’s children.

India ended the day one of first test against England by picking up just three wickets and conceded 263 runs. England captain Joe Root was still in the crease after scoring a mammoth century and is still acting as a threat for the Indian team. As of now he scored 175 runs with 17 fours and one six. Indian bowlers including Ashwin Ravichandran and Washington Sundar who are playing in the home grund, couldn’t get the breakthrough team India desperately needed.

Meanwhile, on day one, when bowlers are tired and looked down in the field, Rishab Pant came up with a short but hilarious song to cheer his junior Washington Sundar. “Mera naam hai Washington, mereko jana hai DC (My name is Washington and I want to go to DC),” Pant composed the poem in no time after a delivery was bowled by him and the song, fortunately caught the stump mic. The video is left the internet in splits as it is being widely shared in social media platforms.

However, the test match which is being played in Chepauk of Chennai, completely dominated by England so far. Along with Joe Root, Stokes displayed a brilliant batting skill and scored a half century and Dominic Sibley scored a valuable 87 for his team.

Check out some of the hilarious reactions for the song composed by Pant on the field :

I’m watching the match just to hear comments from pant just like this one.

Petition to add "Rishabh Pant" to the list. pic.twitter.com/vuI6VBOdpK

Rishabh Pant seemed to be in a jolly mood today.

Comment your views on this cute little poem of the 23 year old !!

Actor Ajith Kumar Cheated Rs.18 Lakh Of This Producer ?? WATCH
Lokesh Deleted This Scene From “Master” Because Of Gouri Kishan ??