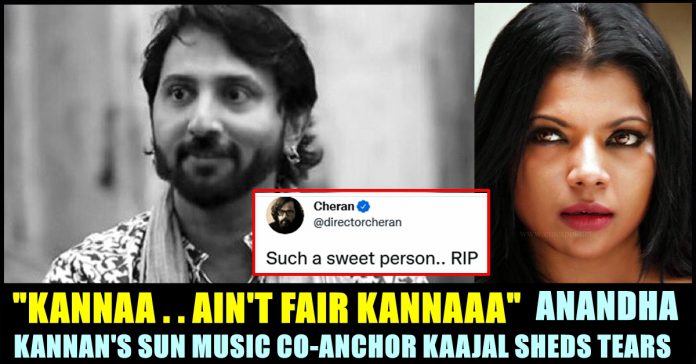 Anandha Kannan, one of the popular anchors of Sun network’s prominent music channel Sun music during early mid 2000s, passed away after fighting for his life with a rare “Bile Duct Cancer”. The 48 year old who started his career as a Television anchor, tried acting in films as well. He was getting treatment at the Apollo hospital that is located in Trichy.

After gaining a separate fan base through his anchoring skills, Kannan also acted in serials and films. He who made a cameo in Venkat Prabhu’s “Saroja”, acted in films such as “Ithanai Naalai Engirunthai”, “Athisaya Ulagam” etc. Reports suggests that he acted as a brand ambassador for Naturals Spa & Salon, owner of which updated about his health issue 10 days ago.

Our dear friend and talented Sun Music Vj #AnadhaKannan is fighting for his life with a rare "Bile Duct Cancer".
His contribution in building the brand "naturals" is immeasurable and I consider him as a brother born to an another mother.
Requesting all of you to pray for him. pic.twitter.com/SFFGwWJHbk

Now, after knowing about the news on his death, Kaajal Pasupathy who worked as a host in Sun music while Kannan was working, uploaded a tweet writing “Kanna . . ain’t fair Kanna” by adding sad, heart break and crying emojis. Hashtag “RIP Anandha Kannan” is trending in the micro blogging social media site as well. Check out the tweet of her and other celebrities, fans below :

Ooh..no..
Took cruel..
May his soul rest in pease… pic.twitter.com/ReAOJxTb2C

A great friend a great human is no more!! #RIPanandakannan my deepest condolences pic.twitter.com/6MtEQGcF8q

Rip 💔 Couldnt beleive this seriously…Big fan of his interviews 🥺😔

Great friend and great human is no more and such an young age he left us and will pray for his soul and more strength to his family 🙏 #ripanandakannan https://t.co/XFuEwY6NIW

Seriously can't believe this.. we missed one of our 90s fav.. #RIPanandakannan pic.twitter.com/8gap5VdhO9

Not only have I seen VJ #AnandaKannan do shows for channels based in Tamilnadu, but I have also followed his growth throughout his career ever since he started with @vasanthamTV.

He was a very talented anchor and had wonderful Tamil diction. Such a sad thing.
#RIPanandakannan

It's really shocking! and heartbreaking to hear that VJ #AnandhaKannan is no more. The most favorite anchor of 90's Kids 💔😢 Our deepest condolences.#RIPAnandaKannan #Sindhubaadh pic.twitter.com/y7hkt4Qk5j

Previous articleAnantha Kannan, Most Loved Anchor Of 90s Kids Is No More !! Internet Mourns
Next articleFather Tried To Kill His Daughter For Falling In Love !!! Comments That Surfaced Shocked Internet

Actress Slammed Men Who Are Sending Pictures Of Their Private Parts !!

Actress Anumol who is known for her works in Malayalam film industry, expressed her frustration on receiving pictures of private parts of random men...

Youth Absconded After Marrying Lover With The Consent Of His Wife !!

Not many days ago, a report emerged saying that a middle aged guy married his lover with the consent of his wife. It was...

“They Extorted Money From Me” – Raiza Accused The Doctor !! OFFICIAL PRESS RELEASE

Raiza Wilson came up with a press note stating that she is the victim of the medical treatment performed to her by Dr. Bhairavi...