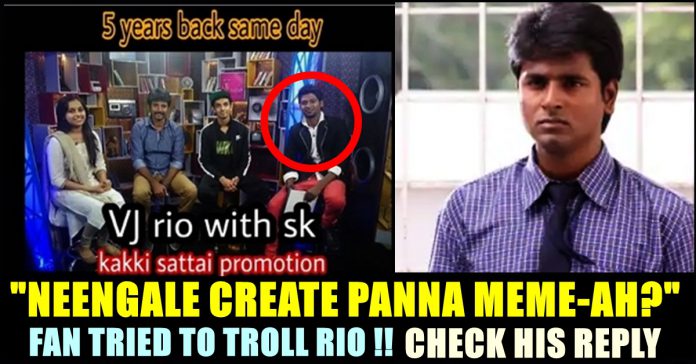 Rio Posted A Comparison Meme Of Himself With Sivakarthikeyan !!

Rio Raj who recently debuted in Tamil film industry as protagonist through “Nenjamundu Nermayundu Odu Raja” film is currently hosting selective shows in Vijay Television. The film “NNOR” became a super hit at box office and ended up being a profitable venture for producers and distributors.The film’s Satellite rights acquired by Star Vijay. He is all set to debut in his next film as protagonist. The film which is titled as “Plan Panni Pannanum” is going to have actress Ramya Nambeesan as female lead.

Rio has acted in Kana Kaanum Kaalangal Kalooriyin Kathai serial as one of the protagonist. After that he started working as anchor in Sun Music. After anchoring for a while, Rio returned to acting in Vijay tv. He appeared as “Saravanan” in a popular serial “Saravanan Meenatchi”.

The upcoming film “Plan panni pannanum” is going to be directed by Badri Venkatesh by having Yuvan Shankar Raja as musician. The filmmaker is known for directing “Bana Kathadi”. The makers have released the teaser lately and the first single of the film got released today.

Meanwhile Rio who is pretty active in Instagram enjoys nearly 10 lakh followers. The actor posted a meme in his official Instagram account saying that he hosted a promotional interview of actor Sivakarthikeyan’s Kaakki Sattai movie along with him. Now after 5 years, as he became a hero now, expressed his gratitude towards Sivakarthikeyan for making him a hero in “NNOR” by producing the film.

The meme had the combination of two pictures of Rio as anchor and Rio as hero. “5 yrs ago was an anchor interviewing the hero. 5years later today, standing here because of the same hero. Will be forever grateful Sivakarthikeyan Na” he wrote in his post.

5 yrs ago was an anchor interviewing the hero. 5years later today, standing here because of the same hero. Will be forever grateful Na . @sivakarthikeyan 🙏🏻🙏🏻🙏🏻

Many of the followers of Rio lauded Rio and wished him the best for his upcoming project. However one of a follower who saw this post, asked Rio if he made this meme on his own. “Anna meme yaar panna….. Neengale panna maari irukku….. 😜😁 j summa sonna anna #congrats God bless 🙏 always success full journey…. ❤” ( Brother who did this meme, looks like you made it on your own. Just fun, God bless 🙏 always success full journey) the user wrote in his comment.

Rio who saw this tweet replied in a positive way by saying that we have to appreciate ourselves. “No one will expose our good things. We have to tell by ourselves. Spread positivity” said Rio in his reply comment.

Check out the screenshot of their conversation :

Previous articleTamil Bigg Boss Star Slammed Pa.Ranjith For This Reason !!
Next articleVijay Devarakonda Forced By Producers To Return His Salary ?? Check Why

Today Sun TV telecasted 2001 critically acclaimed film "Pandavar Bhoomi" as a noon show. The film which was written and directed by Cheran, has...

Celebrity’s Daughter Takes Dig At Couples For This Reason !!

Pallavi Agarwal, a doctor by profession is a daughter of popular Tamil folk singing couple Pushpavanam Kuppuswamy and Anitha Kuppuswamy. Being a Tamil folk...