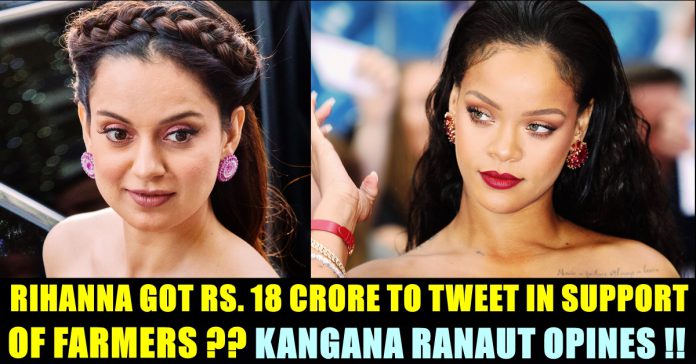 After predicting that Rihanna must have charged Rs.100 crore for the tweet she posted supporting Indian farmers, Kangana shared an article that claimed that the pop superstar has received Rs. 18 crore and trolled her. Earlier, in an interview to Republic TV, the actor said that the Barbadian singer, worth a reported $600 million ( ₹4300 crore, according to Forbes), must have charged ‘at least ₹100 crore’ for her tweet. Now, in her recent tweet, Kangana also slammed Forbes for their fake report of Rihanna’s income.

On Tuesday, The pop-superstar extended her supportive hand to the ongoing farmers protest in India. “why aren’t we talking about this?! #FarmersProtest” Rihanna asked while sharing an article regarding it.

why aren’t we talking about this?! #FarmersProtest https://t.co/obmIlXhK9S

This tweet from Rihanna who is enjoying 101 million followers in twitter, garnered a large number of reactions from International celebrities, politicians and activists from across the world and brought added focus to the movement. So far, the tweet received 841k likes with nearly 450k reactions.

Soon after Rihanna’s tweet started trending in India and all around the world, Bollywood actress Kangana Ranaut who is known among Tamil audience for acting in “Dhaam Dhoom”, hasbeen uploading a series of tweet slamming Rihanna for supporting the farmers. She who called Rihanna a “fool”, termed “farmers” as “terrorists” in her tweet. She also compared herself with Rihanna through several tweets and criticized the pop singer by writing “she can shake her bum cheeks and expose her ass crack right in to the camera lens while singing..ya that’s all. Nothing else.”

Now, Kangana shared an article that said Rihanna received Rs. 18 crore to post the tweet and said that the amount is so small that she would gift her friends with that kind of money. She also slammed Forbes by saying that they have no access to the financial data of celebrities and asked them to sue her if she is lying.

The article Kangana shared said that a PR firm where Khalistani Mo Dhaliwal is a director, paid Rs. 2.5 million to pop star Rihanna to tweet in favour of the farmers protest which is estimated to Rs. 18 crores of Indian currency.

Check out some of the other tweets Kangana posted against Rihanna :

No one is talking about it because they are not farmers they are terrorists who are trying to divide India, so that China can take over our vulnerable broken nation and make it a Chinese colony much like USA…
Sit down you fool, we are not selling our nation like you dummies. https://t.co/OIAD5Pa61a

Yes please India wants to know, to simplify to Indians, she is a singer much like Sunidhi Chauhan or Neha Kakkar …what is so special about her, well… she can shake her bum cheeks and expose her ass crack right in to the camera lens while singing..ya that’s all. Nothing else. https://t.co/FGEj6hb0II

Yesterday, South beauty Trisha Krishnan celebrates her 36th birthday. While we all know that Trisha is an amazing actor with a series of blockbuster...