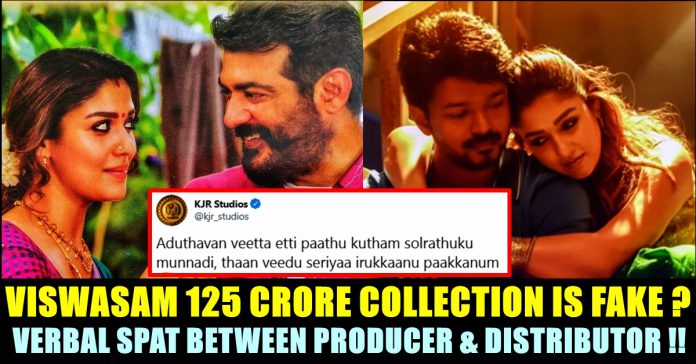 On the occasion of Pongal 2019, South movie lovers are being treated with the pleasure of witnessing an epic box office clash between two of Tamil movie industry’s biggest superstars Rajinikanth and Ajith Kumar.

Ajith, one of the very few Indian actors who has a strong fan base, has entertained the audience with an out-and-out commercial potboiler Viswasam. The film also had Nayanthara, Yogi Babu, Vivek, Robo Shankar, Thambi Ramaiah and Kovai Sarala among others. The film has a great buzz in Tamil Nadu and its worldwide theatrical rights have been valued at Rs 75 crore. Viswasam has been directed by Siva, who has previously directed Ajith in Vivegam, Vedalam and Veeram.

During its release time, KJR Studios, who had distributed Viswasam, officially announced the box office collection of the film. According to their Twitter post, the film has collected Rs 125 crore in Tamil Nadu in eight days of its theatrical run. The film reportedly collected 190 crores on the whole.

Now producer Dhananjayan who is known for producing films such as Chandramouli etc, has claimed the report of KJR studios was fake. He said while replying to a follower who asked “Visawasam 125 Cr in 8 Days Kjr studio’s Officially revealed. Is it possible sir?”

Further Dhananjayan added another tweet saying that KJR studios didn’t distribute the film in certain areas and there is no possibility for him to know about the box office figures of entire Tamilnadu.

You don't know the facts. He didn't even distribute the film in Coimbatore & Trichy areas. So, how will he know total TN box office. It was totally exaggerated. So relax. Tomorrow #Valimai may beat this record & we will all Celebrate that too.

Followed by this, this statement of Dhananjayan grabbed the attention of KJR studios through fan pages who replied to Dhananjayan by posting a video of himself giving an interview to Indiaglitz. In the video we can see Dhananjayan saying that the figures declared by distributors will be true most of the times.

Here’s the reply of KJR Studios :

To this tweet of KJR, Dhananjayan replied by asking them to share the details of how his film collected.

All those who are tagging & fighting on this, pl. ask Distributor @kjr_studios to post the exact share he had shown for TN to Producer. I said #Bigil crossed 80 crore share with details. If he can confirm his film earned more than that, I will celebrate it with @SathyaJyothi_ 👍 https://t.co/haEegMMdW1

Here’s how KJR studios replied to this tweet of Dhananjayan :

That didn’t end there as Dhananjayan came up with another reply saying that the tweet of KJR is very general.

Very general reply than being specific with Distributor share numbers over which this debate is on. If you cannot counter with actual number, then let's not argue further 👍 https://t.co/Y7dKvTVcjQ

What do you think on this verbal spat between them ?/ Comment your views below !!

Previous articleNayanthara’s Strategy To Hide The Tattoo Of “Prabhu” !! Famous Actor Revealed !!
Next articleShanthanu Missed “Subramaniyapuram” Because Of His Father ?? Actor Opens !!