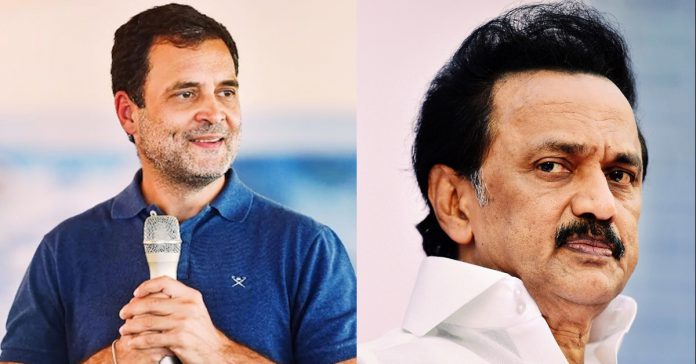 Ahead of state assembly polls, Rahul Gandhi is aggressively campaigning in Tamil Nadu. On Monday, a video of himself performing a push up challenge amidst a went viral in social media platforms. He did 15 push-ups in less than a minute and even ended the drill with an one-arm push-up. The students responded with a loud applause and cheers. The Election Commission announced Friday the poll schedule for four states and one Union Territory, in which West Bengal will vote in eight phases, Assam in three, and Tamil Nadu, Kerala, and Puducherry together on the same day.

Chief Election Commissioner Sunil said that the voting will be spread over a month between March 27 and April 29, and the results for all five Assemblies will be announced on May 2. It is believed that Rahul Gandhi’s campaign in Tamil nadu is going to consolidate the Congress party’s traditional vote bank. His efficient campaign strategies is highly believed to help him in getting more seats from DMK alliance. The congress leader started campaigning for his party in Kanyakumari, Thirunelveli, Thoothukudi and Thenkasi by paying respects to the statues of former leader Kamarajar with garlands.

This decision from the DMK party has made the authorities of Congress party to reconsider about the alliance. Both the parties are expected to reveal about their seat-sharing before 4th of March. The talks between Communist parties and DMK about having alliance went in vain. The Marxist Communist Party of India reportedly demanded 12 seats. However, DMK party has accepted to give only 5 seats for the party which made them to step back from having an alliance.

Previous articleThey Approached Me To Do “Adjustments” When I Was 20 – Young Tamil Actress !!
Next articleThis Tamil Actor Fell In Love With Losliya ??

Following the commercial success of ‘Mersal’, Vijay teamed up with director AR Murugadoss for the upcoming yet-untitled flick, which is currently underway. While the...

“Soorarai Pottru” Fame Kaali Venkat Got Upset On Seeing The Headlines About Him !!

Actor Kaali Venkat of "Soorarai Pottru" and "Irudhi Chuttru" fame got upset on seeing a media portal exaggerating the statements he made regarding the...