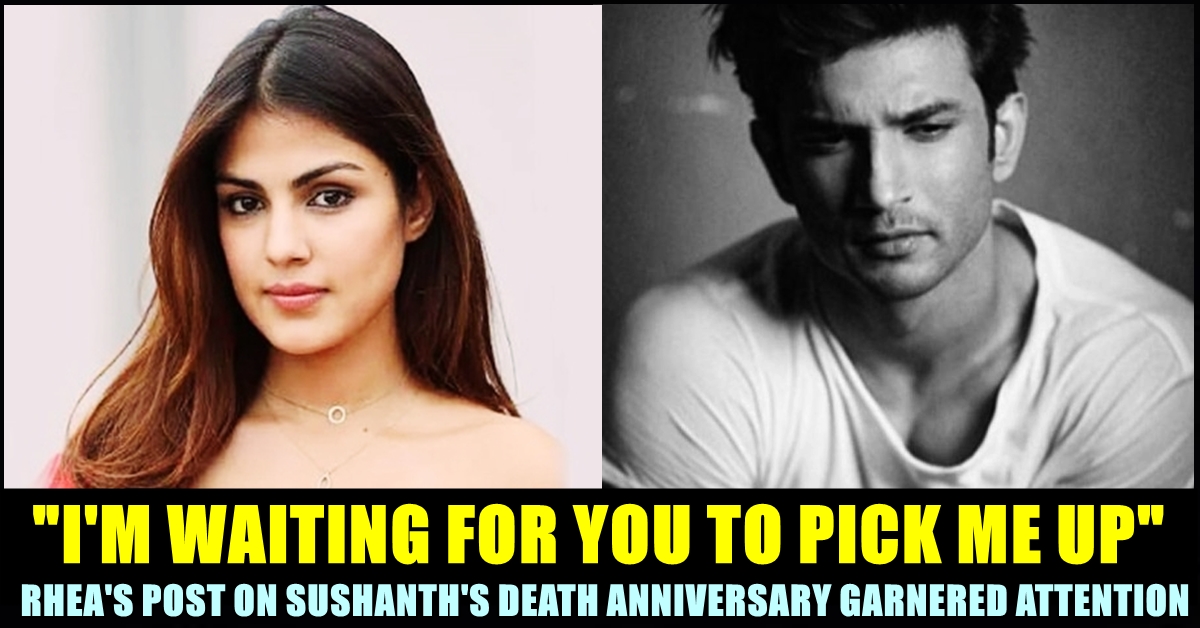 Actress Rhea Chakraborty with whom late actor Sushanth Singh Rajput dated while being alive, came up with an emotional post on the first death anniversary of the actor. She expressed her emotions over the “MS Dhoni” actor and said that she waiting for him to “pick” her up everyday. Using the terms which are familiar only to herself and Sushanth, Rhea penned a long post by a uploading a picture of them together.

The post garnered huge attention from media and fans with various kind of reactions. The actress was subjected as a prime suspect in the death case of Sushanth and later accused of providing illegal drugs to him. However, recently she was titled as a “Most desirable Woman of 2020” by Times group. Apart from Rhea, many cinema celebrities and fans from across India uploaded posts expressing their condolence to the actor.

Rhea who confirmed her relationship with the actor in the police interrogation, revealed that they were living together throughout the lockdown before she left his apartment due to a fight which broke out between them. She reportedly informed police officers about the details of their fight and showed them they were in touch via phone and text message after it. Rhea was the last person Sushant called before going to bed, according to reports.

Sushant Rajput singh died by suicide on 14th of June, at his home that is located in Bandra, Mumbai. The preliminary post mortem reports revealed asphyxiation by hanging as the cause of death. Sushant’s demise shocked the entire country as the actor looked very much promising as far as his career in cinema field is concerned. Now, Rhea, through her post, said that Sushanth became a guardian angel and is protecting her.

“There isn’t a moment where I believe that you aren’t here anymore. They said that time heals everything but you were my time and my everything. I know that you are my guardian angel now -watching me with your telescope from the moon and protecting me.” Rhea said in her post and went on to add “I wait for you everyday to come pick me up, I look for you everywhere – I know you’re here with me ❤️ It breaks me everyday, then I think of you saying –“ you’ve got this bebu” and I carry on to the next day.”

“A barrage of emotions cross my body everytime I think of you not being here . My heart aches to write this , my heart aches to feel anymore.. There is no life without you ,you took the meaning of it with you.
This void cannot be filled.. Without you , I’m standing still.. My sweet sunshine boy , I promise to give you ‘Malpua ‘everyday and read all the quantum physics books in this world- please come back to me 🙏” she further wrote and concluded her post by calling Sushanth as her best friend, love, her man and Bebu.

Chinmayi Updated About The Legal Actions She Initiated Against Doctor Aravintha Raj !!
Video Of Woman Comparing Girls With Gold Became A Subject To Severe Online Troll !!