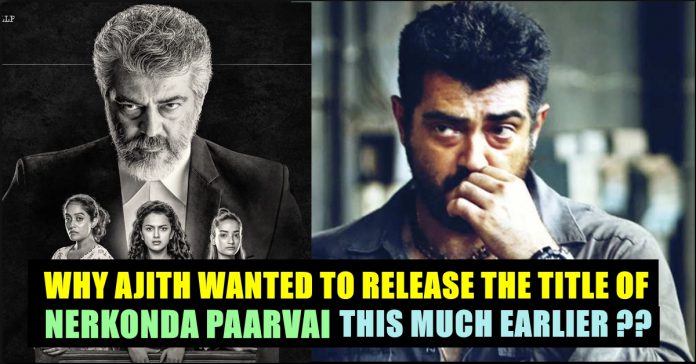 REVEALED : Why “NERKONDA PAARVAI” First Look Released This Much Earlier ?? Check Out !!

The first look and title of Pink’s Tamil remake is finally out yesterday night. Titled Nerkonda Paarvai, the first poster of the remake is exactly like the one of the original film. Thala Ajith, Shraddha Srinath, Abhirami Venkatachalam and Andrea Tariang are on the posters of the Tamil version of the film. Janhvi Kapoor also shared the poster on her Instagram stories excited for her father’s first Tamil film. While Vidya Balan will also be making her debut in the Tamil film industry with this film, she is not on this poster of the film. Directed by H Vinoth, the film will be produced by Boney Kapoor.

Fans can’t contain their excitement for the film already! The first look and even the film seem quite promising. Ajith’s last film, Viswasam, did wonders at the box office. It turned out to be a massive success and we are pretty sure that this one will also be a success. We are hoping the film is just as impacting as the original one. Ajith has portrayed a lot of strong characters on the big screen before but this one is a bigger challenge because of the plot.

The reason is nothing but because of the decision made by the actor himself. The habit of using tentative titles for the upcoming films of Top heroes became mandatory as fans have no other choice to mention their favourite Hero’s untitled movie in social media.

Ajith did not liked the idea of his upcoming movie being called as Thala XYZ by his fans and media which made the crew to announce the title much earlier than the other movies of him says movie tracker Ramesh. “The actor also disliked the idea of midnight announcements” says Ramesh in his tweet.

His tweet read as “After #Vivegam , #Thala #Ajith wanted two important changes in his upcoming movie announcements.. He didn’t want #ThalaXYZ numbers referring his movie titles.. So #Viswasam and #NERKONDAPAARVAI announced early.. Also, no mid-night announcement business.. Jus do it during day..”

Also, no mid-night announcement business.. Jus do it during day..

But fact is #thala only created the trend of saying numbers as the title, before announcing the title.. then every actors follow him..

Genuine down to earth human being ❤️💛✌️👍 #NERKONDAPAARVAI #AK59 #Thala59

Previous article“Thanks For The Title MAKKAL SELVI” Happily Said Varalakshmi Sarathkumar !! Check Out The Reactions !!
Next articleFan Girl Slapped Prabhas After Taking Picture With Him !! You Must See His Reaction !!