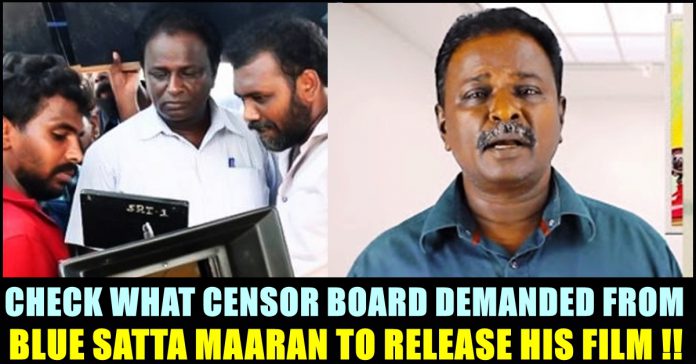 Popular film reviewer “Blue Satta” Maaran recently released the motion poster of his debut directorial in his own youtube channel “Tamil Talkies”. After Censor Board refused his film “Anti Indian”, Bluesatta Maaran came up with a tweet in his official twitter account saying that he has approached the revising committee for reconsideration and assured that his film will get released at appropriate time. Now, a shocking report surfaced saying that the revising committee imposed restrictions against “Anti Indian” and asked the makers to remove several scenes to get the final approval.

It has been reported that the film was watched by the members of revising committee and they reportedly asked the makers of “Anti Indian” to have 38 cuts in the whole film. Only if the makers of “Anti Indian” agree to chop out 38 scenes (or dialogues) in the film, they will be able to get U/A certification, said the report of Valaipechu. They also have asked the filmmaker to change the title of his film to get it released.

Recently, Maaran released the first look motion of the poster of the film in his youtube channel. Produced by Adhan Bava, the poster starts with the caricatured version of a death procession with people of all the religions participating in it. “Kanneer Anjali” (posters made to pay tribute for the deceased) posters of E. Badshah, played by Maaran could be seen plastered on the wall with a political party actively involved in campaigning.

When the campaigner promises to provide endless amount of milk and honey, a man who is drunk asks “What about booze ?”. Title “Anti Indian” appears with a monkey sitting on a throne which is placed on a grave. Monkey could be seen donning a “saffron” colour robe around its neck. The poster strongly hinted that the content of it is going to be film against the BJP government

Watch the motion poster below :

Previous articleDavid Warner Expressed His Admiration Towards Dhanush !! Fans Can’t Keep Calm
Next article“Premam” Director Alphonse Puthren To Direct Rajinikanth In His Next ??

Instead of celebrating its 50th year anniversary, AVM Rajeswari theatre in Chennai, has announced that it is going to get closed permanently. It has...

“Which One Is The Lower Caste?” Question In Semester Exam Creates Outrage

Question about caste in a second semester MA History exam paper at Salem's Periyar University in Tamil nadu has sparked a controversy in the...