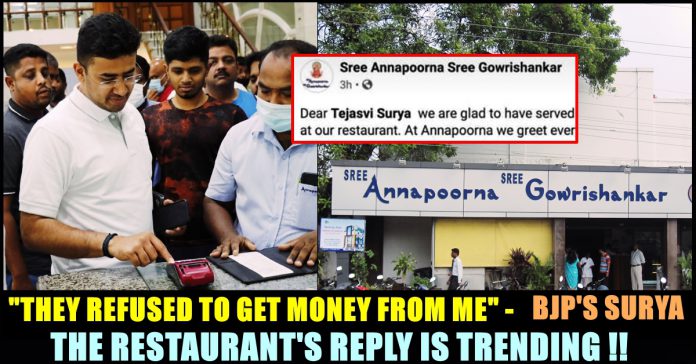 Ahead of the Tamil nadu assembly election which is scheduled on 6th of April, Political parties of the state are looking for all the ways to promote their party and symbol. BJP’s Tejasvi Surrya, National President of BJP Yuva Morcha, on Friday, came up with a twitter post sharing about his experience of eating break fast as a restaurant. He said that the cashier hesitated to accept money and received it after his insistence.

In his post, Surya took a dig at DMK party based on an incident that took place in a hotel. The men of DMK including youth secretary Yuvraj, visited a hotel and claimed free biriyani, said a hotel owner who got severely beaten by them after denying their demands. The incident took place in 2018 and DMK suspended those who were involved in causing trouble for the hotel owner. DMK leader MK Stalin also visited the hotel to comfort the owner. However, the incident still haunts the party and gained them a black mark.

Today after breakfast at restaurant, I naturally went to pay.

Cashier hesitated to accept money. With great hesitation he accepted after insistence.

I told him that we are from BJP. A party that respects all and protects all. Not DMK to do roll-call even from small businesses. pic.twitter.com/SvSrff49if

The tweet got widely reached among the social media users by garnering 23k plus likes and 4k plus shares. To our surprise, the official Facebook handle of Sree Annapoorna Sree Gowrishankar restaurant in which Tejasvi Surya had his break fast, came up with a response saying that no one forced them for anything free.

“Dear Tejasvi Surya we are glad to have served you at our restaurant. At Annapoorna we greet everyone with the same love and gratitude, in fact everyone comes forward to pay their bills.No one has forced us for anything free. As a token of love and respect we sometimes refrain from taking money from people who work for our society” the reply post of the restaurant read.

This post from the restaurant garnered enormous number of reactions trolling the BJP politician. Check out some of them below :

The elections for 234-member assembly will be held in single phase. The counting of votes will take place on May 2. All elections in 38 districts of Tamil Nadu consisting of 234 Assembly Constituencies will be held in single phase. A total of 6.26 crore people including 3.18 crore women, 3.08 men and over 7,200 persons from the third gender are going to vote in the assembly election, according to reports.

Previous articleCM EPS Thanked A Vijay Fan During His Campaign !! WATCH VIDEO
Next articleTamil Actress Said That She Can’t Vote This Time !! Got Thrashed

K.S Ravikumar is one of the most experienced filmmaker of Kollywood film industry. In a career spanning around 30 years , he has directed...

Vanitha Vijayakumar Says That She Sees Peter Paul As Her Child !! WATCH

Producer Ravindran and actress Kasthuri released a video supporting Lakshmy Ramakrishnan who got involved in an argument with Vanitha Vijayakumar during the night of...