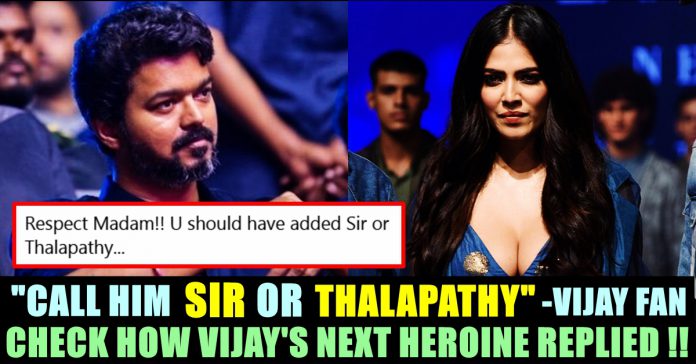 Celebrities across the industry of Tamil cinema, has wished Vijay’s new film “Bigil”. When the trailer of the movie released, it was lauded by Bollywood Superstar Shah Rukh Khan to the emerging actor of Kollywood Sivakarthikeyan.

Now as the film released yesterday, many celebrities wished the film a very best to succeed in box office. Check out some of their wishes below :

Actress malavika Mohanan, the actress who is known for her appearance in Rajinikanth’s Petta also wished the actor’s movie, a best wishes for success. In her tweet she wrote “All the best @actorvijay for #bigil! Can’t wait to watch it tomorrow! 💃🏻 I’m sure you’ll rock as usual 😎”

All the best @actorvijay for #bigil! Can’t wait to watch it tomorrow! 💃🏻 I’m sure you’ll rock as usual 😎

It is very well known for all of us that the actor has a strong fan base in Tamilnadu. His screen presence made many of the youngsters of Tamilnadu to go crazy which made them as an ardent fan of the actor. Vijay also has a special bonding with his fans which is evident through the audio launch speech of “Bigil” movie.

To this tweet of Malavika, one of a Vijay fan asked the actress to give respect to his idol by calling him as “Sir”. “Respect Madam!! U should have added Sir or Thalapathy…” wrote the fan as reply to the tweet of the actress.

Respect Madam!! U should have added Sir or Thalapathy…

To this reply of Jammy Boy, Malavika Mohanan who is pairing up with Vijay in his upcoming movie, said that the actor asked her not to call him as “Sir”. She even added that she has a lot of respect towards the actor.

“Vijay sir asks me not to call him ‘sir’! Haha 😃 Nothing but lots and lots of respect for thalapathy! 🥰” her reply to the fan boy read.

Vijay sir asks me not to call him ‘sir’! Haha 😃 Nothing but lots and lots of respect for thalapathy! 🥰

The movie of Vijay and Malavika Mohanan is tentatively titled as #Thalapathy64 and is being directed by Lokesh Kanagaraj. What do you think on the reply given by Malavika ?? Comment your views !!

Previous articleOne Of These Movies Is Going To Get Sequel !! OFFICIAL CONFIRMATION !!
Next articleOld Video Of Chinese Rescuing Child From Borewell Within Minutes Goes Viral !! WATCH !!

A 55-year-old man lodged a complaint at the Tondiarpet police station because he allegedly lost his slippers worth Rs 800 on Sunday. Police in Tamil...