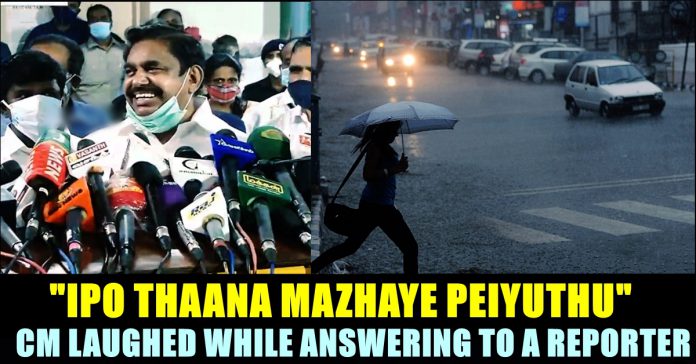 “People should stay safe. They must not go out without necessary requirements. We have restricted buses from operating in 7 districts today. Tomorrow will be a public holiday due to the heavy rains being caused by the cyclone. I have ordered authorities to provide food, shelter and other things such as bedsheet, mat to the people who are going to stay in the camps. Milk will be provided for children” Chief minister Edappadi Pazhaniswamy said in the press meet.

It is believed that Tamil nadu is applying the lessons learnt from the previous devastating cyclones, Gaja in 2018 and Vardah in 2016, to prepare for the heavy rains and wind that have been forecast from the day in Chennai and districts such as Cuddalore, Pudukottai and Viluppuram. Prime minister Narendra Modi interacted with chief minister Edappadi K Pazhaniswamy and assured the assistance of the center.

National disaster response force have been mobilised to coastal regions. Six teams are in Cuddalore which is one of the worst affected regions in the state during every monsoon and cyclone. Two teams are on standby in Chennai and one in Madurai.

Meanwhile, during the press meet, one of a reporter questioned Chief minister Edappadi K Pazhaniswamy to disclose about the details of the relief funds. The CM who didn’t expect such question, said “It is just raining now, ain’t it ??” in a laughing manner and said that Government is fully prepared to provide relief fund considering the situation.

Watch the press meet below :

Chief minister, further answered many other questions asked by the reporters. It is reported that people who are living in low lying and flood prone areas have been asked to move to safer places and district authorities are shifting them to relief camps with food and necessary medical aids. Chief minister Edappadi K Palaniswamy have asked people not to go out for the next three days. Authorities have warned of damage to thatched roofs, water logging, suspension of electricity and uprooting of trees due to the severe cyclone.

The water level at Chembarambakkam lake which caused the 2015 floods in Chennai, reached 82.62 feet out of 85.40 with an inflow of 220 cusecs. “People need not panic. The situation is under good control”, said Greater Chennai corporation commissioner, G Prakash. The city has opened 80 relief camps and another 80 is on standby. Fishing operations has been completely suspended.

On Wednesday morning, IMDB released its list of the most popular Indian films of the year so far and Kamal Haasan's "Vikram" topped the...