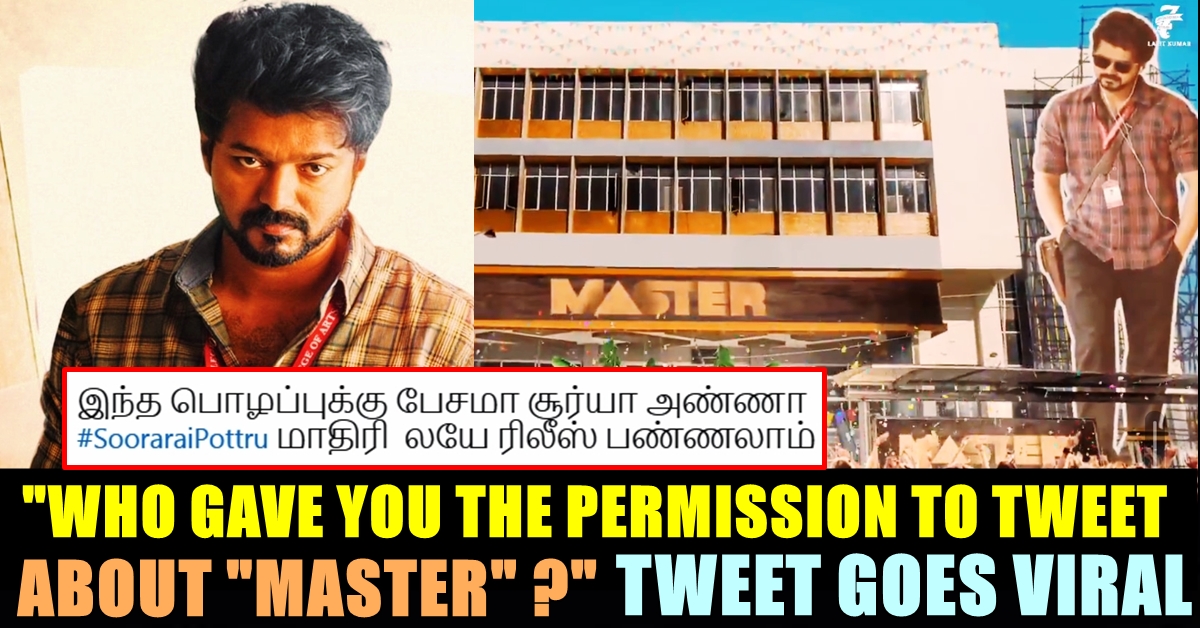 “Master” film is all set to release on theatres after getting postponed for nearly a year due to the COVID 19 outbreak. Tamil nadu government gave permission to theatres to function with 50% occupancies and the makers of “Master” film who are waiting from April month of 2020 decided to release their film on 13th of January in theatres. Despite of actor Vijay’s direct interaction with Chief minister Edappadi K Pazhaniswamy, the government decided to provide only 50% occupancy, considering the spread of the deadly virus.

Vijay sir’s Master releases on Jan 13th.
It’s great news for cinema lovers and I hope watching movies with friends and family helps to thrive the theatre culture once again. Nothing like a theatre experience. Please take all the safety precautions and watch the film in theatres.

The much awaited teaser of “Master” released on youtube lately only make the fans to crave for the film. The 91 seconds long teaser promised a mass commercial action entertainer with a cat and mouse chase between Thalapathy Vijay nd Makkal Selvan Vijay Sethupathi. Starting the teaser by revealing the character name of Vijay, the teaser went on to expose the roles of Vijay Sethupathi, Malavika Mohanan, Shanthanu, Arjun Das, Gouri Kishan and others.

During an interaction with a youtube channel, Lokesh recently announced that there will be a trailer for the film and it will feature the voice of Vijay unlike teaser. Now, fans of “Thalapathy” are eagerly waiting to witness their idol on the big screen. The film is expected to bring back the audience who forgot watching movies on theatres due to the arrival of OTT platforms.

Popular theatres in state Tamil nadu started promoting their premises in their social media handles as well. Ram cinemas which is located in Thirunelveli district made an update saying that the opening song of “Master” will be played two times on the First day First show.

Rohini silver screen that is located in Koyembedu, Chennai have also started their celebration.

On seeing this tweet, a twitter handle named “Dhanam Pictures” replied asking who gave the permission to Vettri theatres to tweet regarding “Master” film’s release on the theatre. They further demanded the theatre to release “Master” in both their screens and said that the film will not release in Chrompet Vettri.

“Who gave you permission to tweet regarding #Master movie releasing in your theatre ?? You have to screen #Master in both your screens otherwise we are not releasing #Master movie in Vetri theatres (Chrompet) Padur Ramesh” the reply of Dhanam Pictures said, bio of which read “Movie distributor of Kaala, Viswasam, Master etc”.

Who gave you permission to tweet regarding #Master movie releasing in your theatre ??

This tweet went viral among the fans of actor Vijay and Tamil cinema. Check out some of their reactions below :

This is how Distributors WARN 😨 Theatres !!#MasterFilm 💥