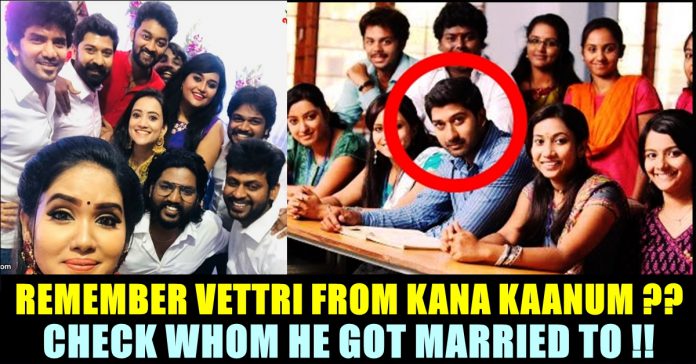 Kana Kaanum Kaalangal is one of the most favourite show for the kids who were born in the early 90’s. The television serial which focused on the students of school became popular among the audience of Television. It topped the TRP ratings during its streaming time. A sequel to the serial called Kana Kaanum Kaalangal Kallooriyin Kadhai has been made. Later another sequel to the serial called Kana Kaanum Kalangal Kalloori Saalai was made, Both the sequels were focussed on college life.

Many of the actors who got a part in the serial turned out to be a stars in Tamil cinema and became familiar face among the audience. Paandi, Bigg Boss star Kavin, “Sembaruthi” serial hero Karthik, Kollywood hero Rio are few of them. If you are an ardent follower of the show, you must remember Prem Vettri who played the role of one of a lead in the first season of the college season. Prem had huge fan following, especially girls during the time of his stint in Kana Kaanum Kalangal. His mannerisms and looks gained him the attention.

Now, a recent update on his marriage has been surfaced and the stars of the entire Kana Kaanum Kalangal has participated in the show. The actor got married to Sushma and their wedding pictures are going viral across the internet. Actor Kavin who is a close friend of Vettri shared a picture of himself with the groom and bride wished them the success for his marriage life.

Sumtym ur pic is a gate to ur flashback

Apart from Kavin, many Kana Kaanum celebrities including Rio attended the reception of Vettri. They called their gathering as reunion which we can see in the video being shared by several youtube channels.

Vettri who is an aspiring actor has appeared in a film named as “Mahabalipuram” which had actors like Karunakaran, Ramesh Tilak in the supporting roles. However he is yet to get a major break in his acting career.

Let us wish the couple a happy married life ahead !!

“This Is So Unfair” – Film Fraternity Consoles Arunraja Kamaraj After His Wife’s Demise !!

Demise of Sindhuja, Director/Actor/Writer Arunraja Kamaraj's wife made the celebrities of Tamil film industry to mourn in grief. It is reported that she was...