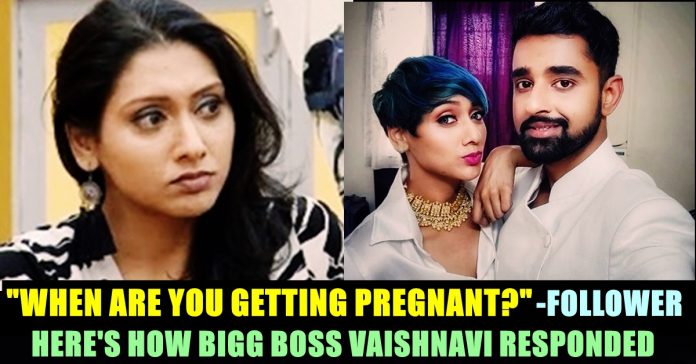 Social media users trying to interact with their favourite celebrities through the question and answer session they are conducting is common in this digital era. But the questions they are choosing to make them reply are mostly inappropriate and personal sometimes. In this occasion, a questioned asked by an Instagram user to Vaishnavi Prasad of Bigg Boss 2, has irked the former radio jockey in big time. She lashed out at the user with three important points.

A post shared by Vaishnavi Prasad (@vaishnaviprasadofficial) on Jun 8, 2020 at 8:45am PDT

Vaishnavi Prasath, granddaughter of Saavi’s Sa. Viswanathan, who is a senior journalist and the founder of the magazine Saavi, was working as a journalist and Radio jockey. She rose to fame among Tamil audience for her participation in the popular reality show which was hosted by Kamal Haasan. After completing her participation, Vaishnavi ot married to her long time boyfriend and pilot Anjan during the mid June of 2019. The marriage function took place without any media attention and only close relatives took part in the event

We did a thing. pic.twitter.com/xUaLsVkQrr

Currently, Vaishnavi is pretty much active in social media platforms creating awareness on the COVID 19 virus. She who never hesitated to give back to the trollers and abusers who are harassing her in online, recently happened to face an Instagram user who is eager to know about her pregnancy.

While answering to a number of followers who questioned on various topics, one of a follower asked whether she is pregnant. He further asked when it is going to happen. “Are you pregnant ?? If no when ??” the user asked.

Frustrated by such a question, Vaishnavi replied by saying that it is none the business of the Insta user. She also said that the question is rude to ask anyone and asked her/him to leave someone he/she don’t know alone.

Check out the screenshot of her answer :

Recently, an Instagram user made a similar question to actress Samantha when she conducted Question and answer session. For a very long time, there has been a constant rumour about Samantha’s pregnancy. The most interesting answer from the actress came when she was asked about it by a fan. The actress who looked extremely tired of answering the question, said that she has been pregnant since the year 2017 and the baby is not coming out.

Comment your views on people showing so much interest in a pregnancy of women who got married !!